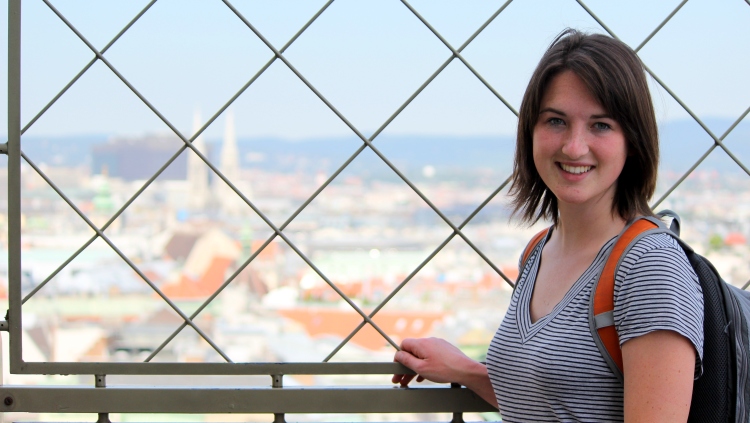 I suppose it doesn’t cross your mind as a Kindergartner that the girl sitting next to you who is so much better than you at drawing the hand-traced Thanksgiving Turkeys will one day be sitting next to you on a bench in Vienna at 7:30 a.m. eating salami-cheese-and-butter sandwiches made the night before.

But life does happen like this, as if it’s really an intricate tapestry where everyone’s threads crisscross in a frenzy of color and panic and beauty and not until we reach the end of the spool will we see just how elaborate a craftsmen the Weaver is.

I think cities can be like this too. Just looking at the U-Bahn maps in Vienna is cause to give those of lighter constitution a small case of nausea. (And to tie it into the tapestry metaphor, those maps ARE really colorful).

Wait a second, Mary – what are you doing in Vienna?

Oh, awesome question. In order to obtain my visa I have to apply outside the country. So at 00:30 on Tuesday morning (that’s 12:30 a.m. for normal people), my good and long-time friend Lydia and I trekked across Prague to the Student Agency Bus station in Florenc. We were guided by eldest daughter of my missionary hosts and cherry-picker extraordinaire, Autumn. She pointed out our stops and explained how the maps work and then left us at the bus station to catch her tram back home saying, “Just pay attention and you’ll be fine!” . . . Right.

Nervous and excited (and tired and cold) we waited for our bus. And when I say nervous, I mean I have been trying to get this visa for a year. A year of horrible working and waiting and worrying. (Not that I should worry, I should trust God more).

The Student Agency buses are like airplanes on wheels. They have very nice leather chairs with TV screens, cup holders, private lights and sound adjusters. A stewardess comes by and offers you earphones and free hot drinks tells you with a smile that unfortunately all their newspapers are in Czech.

It’s a five hour drive from Praha to the Vienna International Airport. We arrived in the soft blue light of early morning, exchanged dollars for Euros inside the airport and then started in search for our transit.

The Czech consulate is open for visa processing from 8:30 to 10:30 a.m. so getting to Vienna at 5:30 a.m. was definitely intentional (let’s not forget that I wandered around in Berlin lost for two hours before finding my bus to Prague). Thankfully, Lydia is minoring in German so reading signs and talking to people I left in her competent hands. I was also pretty positive we wouldn’t get conned with her around.

We found the Czech consulate around 7:30 and decided we’d spend the next hour eating the breakfast we’d packed on a bench across from Schonbrunn castle.

“It’s crazy to think that people used to live here,” Lydia said as she opened a bag of M&M and cookie-bits trail mix. She handed me a banana.

“Yeah, or that the things they built lasted longer than they did.”

Entirely unoriginal thoughts by two completely un-profound young American tourists. And yet so true. Great people bustled about this city living lives and leaving footprints just like we do. Their footprints are just a lot bigger.

The thin, horsey looking woman who greeted us at the consulate at 8:34 a.m. clearly had not been thinking profoundly that morning (nor had she slept on a bus, most likely). I handed her my papers – the papers I have been sweating blood to get in order. We’re talking two separate trips to L.A. for apostilles, countless notaries, and internationally mailed contracts and legal documents. This has been a nightmare.

So believe me when I say, I felt like I was handing her the blue-prints to the ark when I turned over my folder.

“Take a seat, please,” she said. I exited the secure area and returned to the seating area where Lydia had fallen asleep on the leather-covered bench. Go team. It was an old building and except for a nervous man in a purple shirt who sat down next to us in the wait area, it was completely empty.

Several minutes later I heard her shrill voice from behind the glass.

She buzzed me behind the secured glass.

“Zees is not correct. You need Czech notarization, you only hev American.” She pointed towards another glass window. “Take paper to my colleague and she vill give you notary. Ten Euros.”

One notary later, I was being buzzed past the secure glass and I submitted my new paperwork through the window slot.

“Pleaze vait. I vill call you.”

She did call me. Several times. And every time it was to say I was missing something, needed something or hadn’t spelled something correctly. Finally she said, “You hev fee for paperverk?”

“No,” she said with a disappointed here-we-go-again look. “Vee only accept Euros.”

“I was told to pay with Czech koruna,” I explained. By this point the lump in my throat was large enough to have sunk the titanic. I had nearly a hundred dollars in Czech koruna and about $15 in Euros – enough to get me lunch and a ticket back home.

“Kde je bankomat?” I asked, hoping my sub-par language skills would soften her up enough to be vaguely helpful and give me directions to the nearest ATM. They did. She even drew me a map.

I shook Lydia awake long enough to tell her where I was going and not to let our stuff get stolen – the nervous man next to us may have looked a little offended, but I am still pretty sure he didn’t speak English – and then I took off.

The key to crossing busy streets illegally is not to do it alone. Follow the natives.

There were a number of other consulates in the area. I set off a beeper as I passed the consulate for North Korea, which not surprisingly was a lot more gated than the Czech consulate. I don’t think I have ever been more sure a nuclear bomb was pointing right at me. But I guess Kim Jong-un has better things to do with his time because nothing happened.

I put aside worrying about how I was going to afford pulling out another nearly-$100 to pay for this visa in the right currency until I could redeposit my korunas into my bank account. I grabbed the money from the ATM and took off again.

Lydia had fallen asleep on top of our bags, which I thought was a good anti-theft tactic. The long night was starting to intercept my productive brainwaves and keep them hostage – the ransom: coffee.

We finished our business at the consulate – my paperwork for 180 days has been submitted, a few more things need to be mailed. Keep everything in prayer.

Then we looked for caffeine. 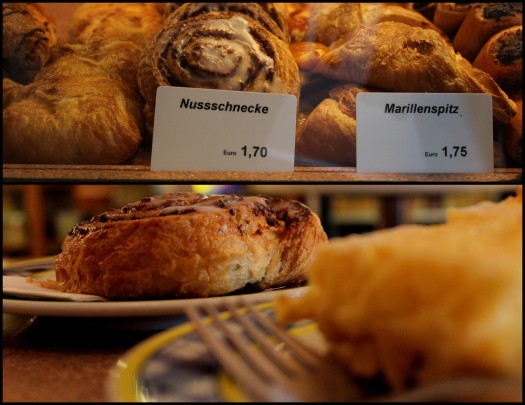 A cafe out of the way of the bustle.

A metro ride away we found ourselves in the center of old town Vienna. The key to finding good coffee in a place like this is to get lost. The farther you are away from the pretty buildings, the less expensive the food will be. Honestly, I think we really scored. Lydia ordered for us with her German, which she persisted in using even after the waitress switched to English. That’s how I need to learn Czech. You will listen to me butcher your language, okay?

So we toured. We got lost. We found an incredible grocery store that looks like VONS but for princesses. We used public transportation and spoke languages that don’t belong to us. To be honest, I was just happy my papers were finally being processed for the visa.

Vienna and back in one day. It wasn’t much of a joy ride – most of our 18 hour trip was on a bus. But the important stuff got done.

On one of the metros we took to get back to the Student Agency bus we saw a sign that said, “Die Stadt Gehört Dir” which means “The City Belongs to You.” I disagree. I don’t think I deserve Vienna or Prague. You have to work hard to make your city your home and I’m not there yet. But I like the idea.

Lydia says people are the same everywhere and I think she’s right. Kings and beggars and women behind glass windows. In every city there is someone who will go out of their way to help you and someone who will try to charge you 20 Euros for carrying your suitcase.

On the way back in to Prague we saw old communist housing structures; maybe a dozen tall, boxy buildings that have since been painted ridiculous colors in an attempt to brighten and humanize the area – kind of like the houses in Tijuana just across the border from home.

But God made us different for a reason, and when we are our own people and live our own lives, we add a colored thread to the tapestry that wouldn’t be there if we were trying to be the same as everyone else. Think of what buildings wouldn’t be built, what museums would have no art, what hospitals would still be using leeches to cure diseases.

Scripture refers to this concept as people being parts of the body – some ears, some eyes, some feet. God uses us all.

I won’t pretend that I am not incredibly blessed, despite what I try to tell myself sometimes. How God will use my time in the Czech Republic, I am so excited to see. I am in the hands of the Weaver and he is good. God is so good to me.

One thought on “A Colored Thread”