I feel the need to apologize for my last post. I promised to keep them short and sweet and that last one was the most unnecessarily long-winded summation of my disorganized thoughts that I have written since sixth grade. If you found yourself a little confused and bored somewhere around the middle, I was too. The only thing I can think to say is that I did write it after an 18 hour bus ride so you’re lucky you weren’t getting excerpts straight from my junior high journal.

Today is a Czech holiday in commemoration of Jan Huss (John Huss). It’s funny because I grew up learning about John Huss as a Christian reformer and a martyr for the faith but in the Czech Republic he is only seen as a political figure. Kind of like the way America pulls out Indian feathers and cranberry sauce for Thanksgiving and forgets the Pilgrims and the prayer aspect of the Day. As long as there’s stuffing, am I right?

We’ve been folding and hole-punching literally thousands of pages all morning for the English Camp coming up in a week and I needed a break, so I grabbed some letters, 50 koruna and an umbrella and set off. (Real Europeans all carry umbrellas even if it’s not raining when they leave. Umbrellas are a pretty foreign concept in San Diego, so I was feeling pretty authentic when I began my walk).

For clarity’s sake, I live in Zbraslav, a suburb of Prague which is essentially the European version of Mayberry.

The grocery store at the foot of the hill where the missionaries live is called ANA. It’s a four minute walk past two dogs that don’t like me and a bus stop I haven’t quite figured out how to use yet. ANA was closed (most places close around noon on Saturdays which is cute but super inconvenient), so I posted my letters in the drop box and decided I’d pay Jan Huss a visit.

There are three statues (I think?) of Jan Huss in CZ. One of them is in Old Town Square in the Center of Prague. He’s set on a huge pillar in champion posture, a visionary look on his face. Around him are sinners and saints cowing around his feet. It’s a sight to behold. 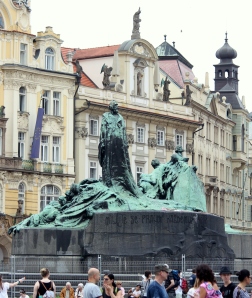 A second statue is right in Zbraslav. It is much, much smaller – I walked right by it without noticing. If I hadn’t been checking both sides of the road to cross the street illegally I would never have seen it behind me. It’s a roughly ten-foot high depiction of Jan Huss. His hands are tied and his back is braced against a stake. He’s standing on a pyre of wood. His eyes are looking up, not victoriously as they do in Old Town Square, but resolutely as if there’s nowhere else on earth he’d rather stand than right there before God and men.

Beneath the memorial are the words “Za Pravdu” which means “for the truth.”

To be honest, a sight like that is a lot to munch on. In tiny, tired little Zbraslav is a carved image of a man dying for his faith. The streets were mostly empty because it’s Saturday, but the few bikers going past didn’t seem to notice this man, immortally framed in his final moments.

It should have been a short walk home, but I got lost.

I held out two weeks, so I don’t want to hear any jabs about this, but I did finally “pull a Mary” and wander around aimlessly for about 45 minutes before accidentally stumbling into a back alley that spilled me onto the main road.

(It was a really cute street, for those interested. Not to stereotype Eastern Europe but it was in a perfect state of disrepair, lined by high, rickety fences. The road was so cracked it looked like a patchwork quilt of grey pavement slabs and splatters. No cars.)

I did get home and I did buy chocolate when I found myself in front of an unfamiliar supermarket during my meanderings. Two wins, if we’re counting. (Actually, I bought a Toblerone because I was missing home a little bit and they are my dad’s favorite, so that’s three wins).

Honestly, I don’t think I’ll be asked to die for my faith here – it’s not that kind of mission’s trip. But if I ever am – if God says, “What will you do for the Truth?” – I hope the look on my face matches the one on Jan Huss.

2 thoughts on “Lost in Zbraslav”