“Learn the language,” my Dad said as we drove towards LAX beneath rumbling gray clouds. “Aside from sharing the Gospel, learning the language is the most important thing you can do over there.”

Every year for Christmas and my birthday my Dad gets me another book of Czech language guides or maps of Prague (except for last Christmas – he got me a “Basics to Cooking” DVD series and I can’t help but think it may have been a reaction to some of my less-than-successful holiday baking). My Dad loves words and languages and he not only passed the word-worm to me but has gently pushed that worm into a rabid, man-eating insect. I’ve become obsessed with learning as much Czech as I can as fast as I can, at the expense of regular conversation.

Of the many awesome things I have and will get to do to help missionaries Jerry and Marilyn this summer, English Camp is one of the highlights. For three years I’ve heard about how awesome English Camp is – ten days of English lessons followed by crazy games, outlandish skits, day hikes and tons and tons of wonderful people. Jerry and Marilyn prepare for it all year and by the time I arrived in June they had already begun “the sweat shop.” Seven of us stapled, folded, stacked, sorted and hole-punched enough paper in three days to make a significant dent in the rain forest. Jerry was good enough to keep me sufficiently drugged with authentic Czech chocolate during the process.

But it was worth it. English Camp lived up to its reputation.

Although I did not teach an English class, I helped in the nursery in the mornings and ran the children’s program in the evening for 7-14 year olds. If I couldn’t learn English, I figured I’d keep learning Czech. And what better place to start than with kids?

I’d flop a kid on my lap in the mornings with a picture book and ask, “Co to je?” on every page until I could identify animals and flowers and food (colors came later in the week). It didn’t take long for me to discover my newest, most favorite word ever. Okurka – Cucumber.

During meals and afternoon activities I got mini lessons from adults and kamarady my age. Czechs have incredible patience with Americans. They will sit and listen to me conjugate verbs into singular and plural persons, first, second and third as if they came to teach me Czech instead of to learn English (“And remember to keep the sound at the front of your lips,” Julie would tell me, ever vigilant in her instruction).

“I’m a little bit jealous, really,” Julie confessed to me one day at lunch in her sweet British accent. “There are so many people here to teach you Czech I feel like you don’t need me.”

I will always need Julie.

But there were a lot of teachers available and they taught me how to say, “I have good teachers,” “I am a big American,” and “I’ll be here all week.” 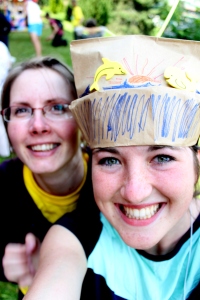 With a friend at our make-shift circus at English Camp! I made the hat myself.

By Wednesday I had reached the point where I could create my own sentences using words I had already learned. That day we went on a 34 kilometer hike (roughly 21 miles) around the šumova mountains. There is only so much conversation you can make during a nine hour hike so for lack of better alternatives (and the fact that I don’t always handle exhaustion well) I began calling people cucumbers.

“Ne, nejsem okurka,” my fellow hikers would answer me, surprised and amused.

“I think you should be princezna okurka,” said Matouš near kilometer 28. “Just say you are.”

Matouš and the other guys falling in step with us did not seem to be affected by our blistering pace we were keeping up to be home by dinner time but I was near my limit. So I accepted the title. Princess Cucumber. I can handle that.

The hike ended nicely but my title stuck. Some of this may have been heavily influenced by the fact that I continued to call other people cucumbers (including the hotel waiter who returned several minutes later with the actual fruit in his hand and a smile on his face, “Nejsem okurka.”)

The kids in my evening program would prance up to me (or call out to me during our fotbal matches), “Okurka!” and finally I started correcting them.

In many ways, my conversations seem like a silly waste of time now. Really, who goes about calling people cucumbers? But what starts as a grammar lesson can end as a friendship. And what starts from honest attempts to learn the language of my new friends and neighbors may end in opportunities to share the hope I have in Christ.

That was the greatest part about English Camp. Although a lot of us on the American team were able to genuinely share our faith and answer questions about God, we also sincerely built friendships with people here. And I am so excited to stay here and strengthen those friendships.

Even at church today there were several people who called me by my new nickname. And as I picked up my bags to leave the hotel on Saturday morning the waiter rushed up to me, took my hand and said, “čau, Princeznu Okurka!”