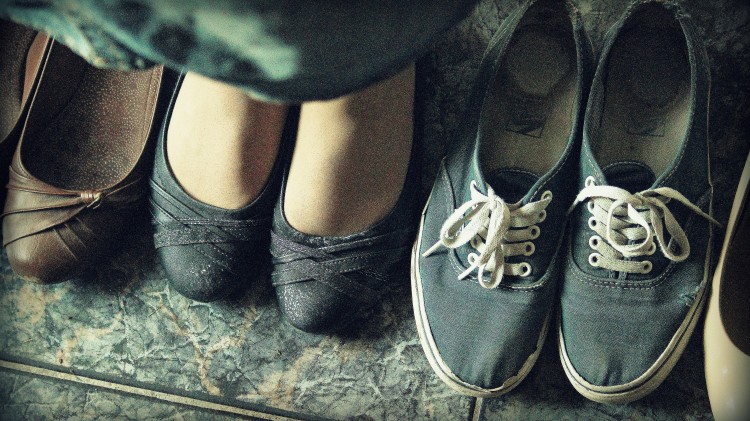 My work shoes, covered in chalk and ready to call it quits for the day.

I distinctly remember the first profound thought I had as a kid – that is to say, the first big thought, beyond “I like fish sticks,” “This girl is weird,” and “Why does Deborah get shoes with Dalmatians and I don’t?” I was sitting in my kindergarten class, cringing as the teacher scribbled on the chalkboard. Every week I told myself the scratching chalk wouldn’t bother me anymore, but every week it did. As I sat crisscross-applesauce on the dusty floor with my little fingers awkwardly plugging my ears I thought to myself, “This will bother me the rest of my life…That could be a problem.”

It is a problem.

Never did I assume I would become a school teacher, though it is one of the jobs I have romanticized about over the years. And all the things I thought I would love about teaching, I do. I love kids saying ‘hello’ to me in the hallway (I LOVE my students). I love pulling little people out of their comfort zones and showing them how much they can accomplish. I love pinning things on my noticeboard in my office (which I also love).

It’s not like it’s the only obstacle to this job. Fourth graders may be the death of me, if we’re being honest. I’d like to believe I’m good with kids, but these four classes of eight year olds have done more to shatter my confidence than a year’s worth of burned dinners, personal rejection and traffic citations (and anyone who knows me knows I get a lot of traffic citations). In just three weeks they have taken my hopes and dreams about being the world’s greatest ESL teacher and turned them into a lame mountain goat.

Not that it’s entirely anyone’s fault. They can’t understand anything I’m saying. Their command of the English language is pretty basic and I’ve been asked not to use Czech in the classroom – not that I could speak it anyway. I wouldn’t listen to me if I were them either – I’m like white noise. We’re in a bit of a bind, really. Usually I end up feeling like a maypole that they can dance around, tie into knots and throw things at. One minute I’ll be in charge and the next they’ll be standing on their desks, swarming around my waist and, on particularly awful occasions, robbing me of my chalk and hijacking the chalkboard. I believe the navy refers to this kind of behavior as mutiny. I call it unnecessary.

My Czech isn’t getting much better, but my Spanish is! I share an office with a talkative Czech woman who’s English is perfect and a moody Spanish professor from Uruguay who I happen to adore. He’s terrifying because I can never tell when he’ll get upset about something (the fish in the cafeteria, the school system in Uruguay, the fact that I don’t have change for lunch money and possibly Barack Obama – I don’t know about that one; that conversation was a little hard to translate). I know enough Spanish to get him talking (and/or riled up) and enough cognates to understand 60 percent of whatever he says when he’s speaking slowly enough. The rest of the time I just smile and nod and watch him make faces. For anyone who watches Covert Affairs, he looks like Teo from this last season – complete with curly hair, burly eyes and swings in temperament. Truthfully, I like him because it’s nice to have a break from Czech and English. I get discouraged by my lack of Czech, but I’m also the English teacher at school and everyone wants to practice on me – it’s nice to have a break from both. We flop between Czech and Spanish like they’re the same language and sometimes I forget which one we’re in. Mid-sentence we’ll switch languages – sometimes just for a word I can’t understand. “Nemám ráda… pescados, pero …to byl dobrý dneska.”  It’s good stuff.

There’s a small mirror in our office above a white porcelain sink where we wash off our yogurt spoons and rinse out our coffee cups. Unfortunately, it’s not low enough to give the onlooker a view of anything below their shoulder blades, so sometimes I go a whole day without noticing the chalk smeared down the front of my blouse. I wear black a lot. That’s a bad idea in this line of work. I look like a sugar coated piece of charcoal by the end of the day. It inevitably gets on my shoes, which I never seem to notice until after my 45 minute bus ride with strangers is complete. I could work at a cement factory and not get as messy as I do in a classroom.

I found out that I’m not actually supposed to clean off the chalkboard (or maybe just don’t have to – translation was a little rough). Students in all my classes kept coming up and grabbing the sponge from me when the bell rang. One of my little guys said in Czech-English, “We…budeme…[gestures hands up and down with imaginary sponge]…clean…” Good effort, champ. Here’s the sponge. Knock yourself out.

But after my last class of the day, when all my students are anxious to get home, they forget to clean the chalkboard and I’m left standing in front of it in all its magnificence. The sponge tends to be wet and sitting somewhere it shouldn’t be, like on a windowsill. A rainbow trail of colored chalk-water leaves ringlets on the sill but the water wrings out a murky red in the sink. I wash off the chalkboard and I feel a little bit like batman, embracing my fears. When the window and the chalkboard and the sink are clean again, I am not. My hands, clothes and shoes (and sometimes face) are stained from a busy day.

I guess it doesn’t bother me so much. The colors are nice.

One thought on “Give a girl a chalkboard…”