I spend an absurd amount of time looking at recipe blogs. I’m not sure if it’s because it makes me feel vicariously like a perfect little homemaker or because reading the voices of no-nonsense women working in the kitchen feels a lot like getting a huge hug from an ‘Aunt Jemima’ figure. The soul needs what it needs.

Anyway, because my cooking skills are nuclear (we’re talking Three Mile Island), and because I recently just spent a week on a single baking project, I decided to do a recipe blog parody.

Enjoy, my friends. Let your heart drink it up.

Last week a woman at school gave me a jar of dough in a plastic baggy with a recipe attached. After awkwardly transporting the jar home in my purse (if I had a dime for every time I got on a bus with something completely random in my bag…), I read the brief message on the recipe. This bread takes a week to make and must be given to a friend who has not made the bread before. Already, it feels like a cult initiation, but I never say ‘no’ to baking.

I was so excited about getting the dough I nearly forgot the first step Monday night. Do not forget the first step. The dough in the jar is only a starter and the yeast needs to start eating the sugar right away!

In case you’re wondering what the grams to cups conversion is, I have no idea. In fact, I faked it for the whole week and the bread turned out just fine. I like to think of measurements more as guidelines.

At this point, you may be asking, “Do we need to refrigerate this?” That’s a good question, to which I have no answer. When I asked the woman who gave it to me, she smiled and said something in Czech that I didn’t understand. If you live in Europe and it’s after September 1st, you’re currently living in a fridge so I don’t think you need to worry yourself. If you live anywhere with humane weather conditions, live a little and just leave the jar on the counter for the week.

Also, now may be a healthy time to move your mixture to something larger than a jar. Unless it’s a really big jar. Your choice.

Wednesday: 250 g of wheat (semi-coarse grained) – do not mix

I assumed that this meant flour. You may assume that also. Resist the urge to mix. I know, it’s tempting. Just back away slowly.

Honesty hour – I only mixed once. I hope that doesn’t mean my cult initiation can be annulled because I don’t want to re-do this spend-a-week-of-your-life-with-unbaked-dough-on-top-of-your-freezer thing more than once. It’s a special kind of fun that is only good the first time. Like ding-dong-ditch or snuffing cinnamon at Denny’s on a dare.

Now you’re going, waaaaait, I feel like we just did this. We did! How observant of you, Smacky. Perhaps you have also observed that you’re definitely going to need a bigger bowl now.

Give three of them to someone on Sunday or Monday.

This was the hardest step for me, not just because the dough doesn’t divide as neatly as one would hope, but because you have to have at least three friends to complete the step. I have two and a half. So I only gave away two portions of the dough and I took the left-over quarter and tossed in some pumpkin and ground coffee. I’m in the process of eating all the evidence. Loneliness never tasted so good.

I refuse to bake with raisins but you can do whatever. If you don’t judge me, I won’t judge you.

Also, a packet of baking powder here is like almost a tablespoon. But again, these are just guidelines. Enough butter will make any disaster of a baking experiment taste worthwhile.

I did not make chocolate icing because as much as I love chocolate, I am way the heck too lazy to make a frosting for anything. Besides, after working on this bread for a week, I expect it to be able to sing, dance and play the banjo without the help of chocolate icing.

“Legend says you can only bake this bread once in your lifetime, but it’s up to you!”

Cute thought, but I think whoever invented that “legend” just needed an excuse to say, “Thanks, but no thanks,” without looking like a stick in the mud. They probably only had two and a half friends. 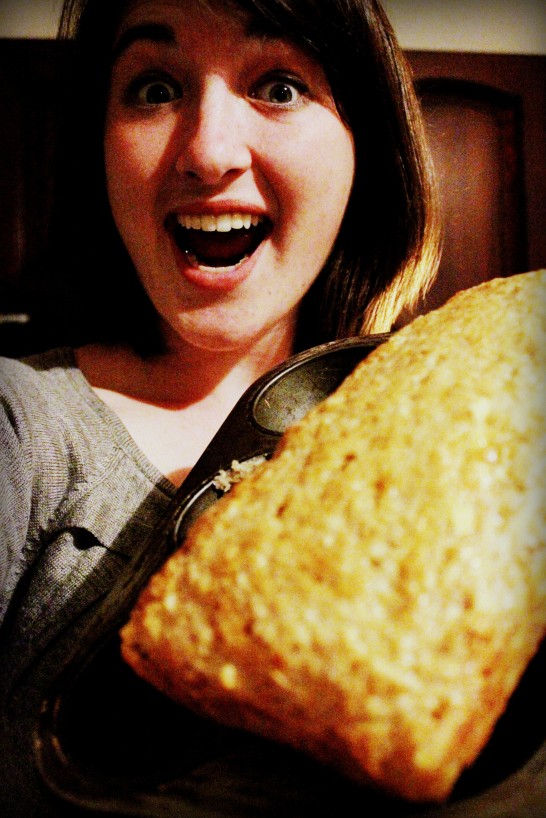 2 thoughts on “Soul Food: A Parody”