Ninth-grade Mary sits in her swivel chair around 9:30 p.m. in 2005 pondering a dilemma. If she messages her brother will she interrupt his studies? And if she leaves him alone will she ever finish this research project?

She clicks on the gtalk box, causing a little blurping noise to ruin the sacred silence of the post-“lights-out” rule strictly enforced by a sister who will remain unnamed. Said sister rolls over in her sleep but does not wake up.

Scotty, are you busy?

Are you sure you’re not busy? I don’t want to disturb you if you’re studying.

Mary inserts emoticon to affirm sincerity of concern because college is super important and 9:30 p.m. for her is after midnight for her favorite freshman.

I am busy, but I am choosing to ignore my other responsibilities because you are more important. You’ll spend most of your life choosing how to invest your time, money, etc. Some things are just worth more than others. What’s up?

I totally don’t remember what my very pressing, very nerdy debate question was for him that night, but I have never forgotten his explanation of investments.

As a penny-pincher by nature (thanks for that trait, Mom), I tend to be the person who can look an adorable kid selling candy outside the grocery store in the eyes and say, “No thanks, honey, not today.” (The trick is to walk away before you see how hurt they look. I know. I’ve sold candy bars outside grocery stores before. In a tutu, for what it’s worth).

This week my school had a Christmas Market after 5th period. Everything shut down and the hallways were transformed into bustling places of business. Tables lined with homemade goods and goodies were manned by adorable 3-9 grade students, most of whom I know personally at this point because I teach Conversational English to the better part of four grades. (I know a few because they keep getting locked out of their classroom and I end up saving the day. Keys equal power).

Set aside in my purse were 120 crowns (about six dollars) for the sole purpose of purchasing items at the market in support of the school fundraiser. Bracing myself for the onslaught of puppy eyes and lower lips, I trooped out of my office. I was in no way prepared for the next hour and a half.

First, to brag a little, I have to say that I have some talented students. On every floor, kids of all ages were performing music – some with flutes and recorders, others with string instruments. I was very surprised to see my more troublesome fourth grade boys occupying a hallway, singing Czech Christmas carols. Some of my more bubbly seventh graders were holding down the cookie decorating station in the classroom on the second floor and – Oh man! – are they Picasso’s with gingerbread men! A sixth grader of mine made a delicious looking crumble that I did not try because the eighth graders on the upper level had already found the loose end to my purse strings (they had very persuasive selling techniques and I ended up purchasing one more muffin than I probably should have). And all of my students had hand-made Christmas cards, toys, decorations and weird paper spiky-things laid out, ready to be bought. 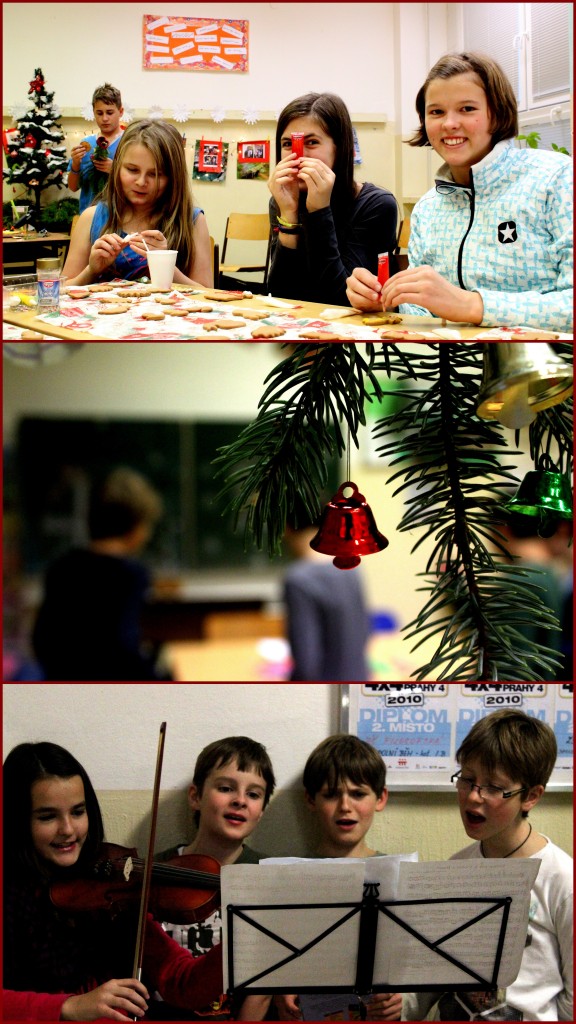 If you think the joy of Christmas comes from giving, you’re wrong. It comes from buying someone’s paper-Mache reindeer. There is a sparkle of joy unmatched by anything on this earth when you buy a child’s laboriously worked-over creation – the thrill of knowing they’ve made something so beautiful you’re willing to spend your money on it.  That’s why capitalism does so well, folks – every day becomes Christmas.

Anyway, the point is I ran out of money really quickly. I couldn’t say ‘no’ because these weren’t just any kids. They were my kids. 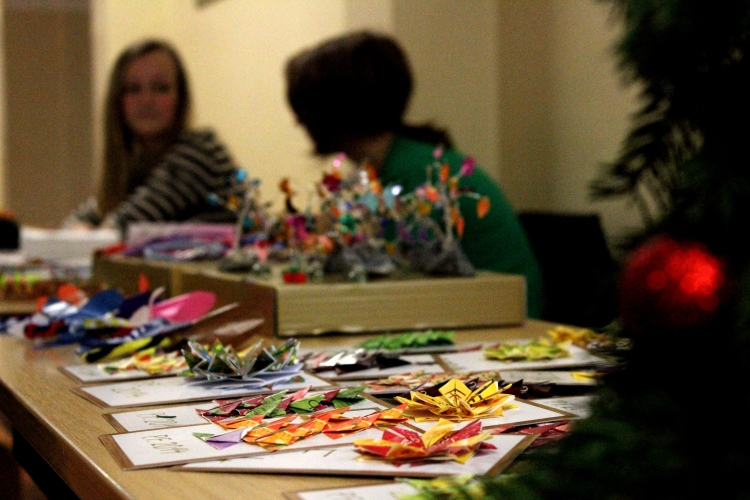 When I got to the last table and looked into the tired, yet happy faces of my ninth grade students, I lost the will to fight. I dug into my wallet and found some extra coins (how I hate busting budgets). Most of the pretty things had been bought already and I couldn’t stomach another Christmas pastry. There was, however, one painfully ugly red doll. It looked like the velveteen rabbit’s evil cousin. Bright red cloth was sewn together in uneven stiches and mismatched buttons had been used for eyes. If Edward Scissorhands was a stuffed toy, he would be this thing. I will probably be visited by images of this oddly endearing yet totally freaky toy in the restless corners of my dreams for years to come. Really. This guy had problems.

“Thirty crowns,” chimed in one of the boys. (He has nicknamed himself “Cholo” because every Czech boy dreams of being a Mexican gangster…).

“Ten,” I said, giving the doll another glance and holding it up by what I think was an ear.

“That’s the wrong direction!” I laughed at him. “You’re supposed to go down!”

(For those of you who are unused to Czech currency, we’re talking about a dollar and fifty cents).

“Twenty,” I said. “You can’t tell me this poor guy is worth more than twenty.”

The row of fourteen year-olds smiled at me and I knew what Cholo would say but I waited for him to spit it out in person.

I looked at the really ugly red doll and thought of the fifteen dollars I had already spent (yeah, really blew that budget). But honestly, these guys had done a great job. Their booth was lovely and they had stayed late at school to help with the fundraiser. And they were my kids.

“Deal,” I said, handing over the money and pocketing the strange red toy. “You guys may run a hard-bargain here, but wait till Tuesday. You’ll be singing a different tune in class!”

Groans and giggles clung to the air even as I left the hallway. Amazingly, I didn’t feel a single ounce of regret at the spending spree – though what I’ll do with a pine-cone ornament and a crocheted yarn-doily (or more importantly, where I’m going to hide the red-thing), I have no idea.

But even if the products weren’t worth their weight in gold, the producers certainly are. I can’t think of a better Christmas investment than these kids and the school we love.