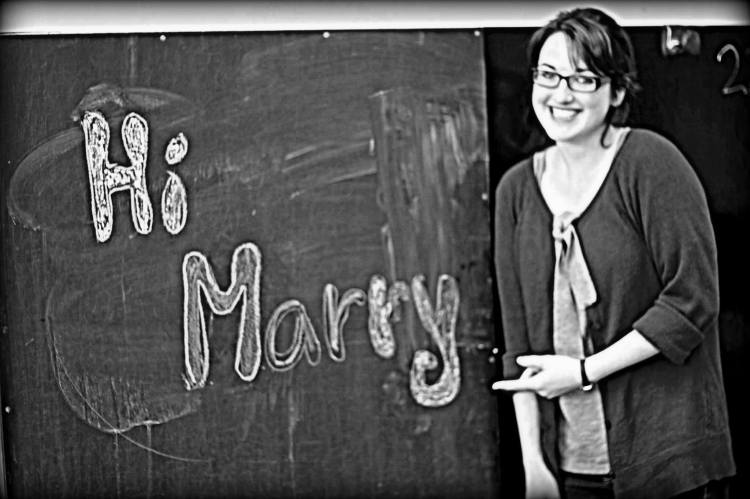 The glint in her eyes told me she meant business. The banana she was pointing at my chest told me it was serious. Plastic trays clattered in the emptying cafeteria and laughter could be heard in the hallway. But next to the deserted food line all was quiet, save her infectious, Calvin-like giggling. Her Hobbes, also armed with a banana-gun, had just returned from stacking their lunch trays. Two to one. I didn’t like my odds.

I pulled a banana of my own from my cardigan pocket. Aha!

I clutched my chest as the pain of the fake bullet made its way deep into my ego, serenaded by the devilish laughter of the two fourth graders responsible for my wound.

Our banana war continued into the hallway where we were met by boys, also brandishing fruit. They were slightly more Viet Cong in their approach, coming behind the girls and pretending to slit their throats with banana-machetes. That’s where I put my foot down – partly because I can be a serious adult and partly because the teacher monitoring the hallway had just rounded the corner.

I’m collecting a series of memories that I call “teacher moments.” They’re the scattered minutes throughout the week that make my job so … gosh, so worthwhile.

Sometimes they’re small things, like all my kids cheering when they teach me a new word in Czech and I say it correctly. Sometimes they almost seem routine, like the class on the third floor that always writes “Hello Marry” on the chalkboard to surprise me before I come in. The grossly uneven American flag scribbled in blue, red and yellow chalk adds to the charm.

Sometimes those moments are stop-you-in-your-tracks touching.

My fifth graders on Thursday afternoons are a mix of unmeshable characteristics. In this class I have more than just the staple quiet, unparticipatory students and the ones who won’t stop talking. Also present are students who tell me every week they don’t want to be there, students who don’t understand the concept of a chair or how it works, students who prefer to lay across the table like a mermaid (or a merman, in this case), and students who will actually throw shoes at, strangle and spit on each other (nothing is more intense than a rivalry between eleven year old boys). Thursdays have become my Mondays.

But after one particularly trying day, as I donned my hat and scarf while walking down the corridor, I spotted *Petr sitting on a bench. He has a real attitude in class and I can barely get him to speak more than two words in English.

*Names have been changed. Not that it matters. Everyone in this school is named Honza or Veronika.

“Pančitelka!” he said to me as I passed. “I am sorry for being bad in class today.”

I don’t know if I was more surprised by the apology or his perfect English.

“Jaromir is very bad,” the blue-eyed boy continued. “He started it. He is mean in class.”

His very frank, very earnest declaration tugged at my already weathered spirit and I leaned down to get on an even level with him.

“I’ll take care of Jaromir,” I promised. “But you have to be good, even if he is not. Do you understand?”

He nodded his head, downtrodden.

“You should talk to his teacher!” he called to me as I walked away.

I did talk to their teacher, but I knew it wouldn’t make a difference. I have come to love my most difficult classes in an odd way. It feels a bit like Stockholm syndrome to be honest. My most troublesome kids are the ones that just get to me.

Like fourth graders Tobiaš and Ostap who spend the first half of every class hiding somewhere in the room so I’ll think they’re absent when I do roll. They spend the rest of class talking too loudly and finding every excuse to not sit in their chairs. Sweethearts they are, ideal students they are not.

But when I see them on Friday afternoons at the front of the school where they’re getting bundled up to go into the cold weekend they will tackle each other in an attempt to reach me first saying, “Meh-dy, we luf you! We luf you!” Ostap even makes little heart shapes with his hands. Before they ever get within three feet of me they’re both rolling on the ground, laughing and pushing each other. I just stand there in the hallway in front of teachers and students looking on curiously, and I melt.

My older students tend to be a lot less cute, but special moments with them are really moving. I’ve noticed that the kids with the worst attitudes have become my most attentive audience. I didn’t realize this when I was in high school, but seeing it as a teacher is incredible – arrogance, snobbishness and solitude are all masks that hide the same thing: hurt. And when you find out where the hurt is, you can start to heal it.

Two girls in my afternoon class have both told me through classroom essays that they don’t have friends at school. I tried partnering them in group activities, but one is painfully shy (Tereza) and the other is painfully smug (Adelka). It wasn’t until the two stayed late to help me clean the blackboard that we began to make progress. I’ve been trying to bring Tereza out of her shell all year and, after discovering a shared interest in Anime, I was making progress! The girls were laughing together as water dribbled in colored streaks down the blackboard. Through conversation, I found out that Adelka’s younger sister is in my class.

Oh, my heart ached for her. Sister jealousy is a burden I cannot imagine having to bear. I set down my sponge and gave her a meaningful look.

“She is sweet,” I said, “But you know what? You are thoughtful. You are quiet, but I can tell you think very carefully before you speak and you are very observant. That’s a really special quality.”

A visible change came over her face and she smiled.

“It is,” she nodded, and I could tell she wanted to believe me.

It has taken a long time, but those two have come so far. But what makes me happiest is that they have started sitting next to each other during my afternoon classes.

I thought it would be hard leaving home again. Two weeks home in San Diego for Christmas, New Years and a wedding – there was barely time to see family, let alone friends. I was worried that sick feeling would grab hold of my stomach as I got on the airplane like it did in June and I would think to myself, “How are you supposed to do this for another eighteen months?”

Instead, all I saw were the faces of my students. I couldn’t believe I missed them so much after just two weeks. I know, I know, I sound like the pathetic cat lady. But when I walked into the classroom on the third floor and saw, “Welcome back, Marry” etched onto the chalkboard I knew.

I knew I was right where I wanted to be.

One thought on “Teacher Moments”