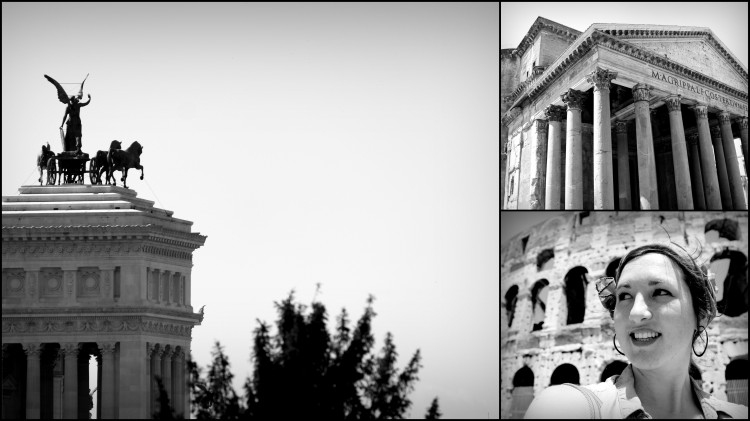 “I’m sure she’ll be fine,” Omar reassured her. The newlyweds watched the crowd shift and change around the elaborate water fountain with the mini-Washington monument and creepy drowning horse sticking up out of the middle.

“Did she check a bag? Maybe it got lost.”

Deborah shook her head. “Wouldn’t she have messaged us if she was stuck at the airport?”

“She could be stuck in traffic on the bus or something.”

“Maybe.” Deborah bit her lip. “Maybe she went to the apartment first and saw we weren’t there and went looking for us…”

“Should I go back and check for her?” Omar offered. Deborah shook her head again.

“I don’t know,” she said. “But this is Mary, so most likely she’s lost and confused somewhere out there.”

And lo, 500 yards away, just around the corner and sitting in a sidewalk café, I was on the verge of tears and desperately trying to get a signal on my phone.

I never wanted to go to Rome. There was no way Rome could ever live up to its reputation, much less its history, and frankly, I’ve seen enough old buildings to last me a lifetime. But for the sake of seeing my pregnant sister and my dashing new brother-in-law, I made the journey from Prague with the expectation that Rome would be a lot like Berlin (and for those of you who are new to this blog, Berlin is where I got lost for three hours in the rain, lugging around a 40 pound accordion and then got conned out of 5 euros by a gypsy. I have never been back).

But to explain how Rome and I first got acquainted, I have to take you back to the airport, exactly to the moment when I was getting directions from the info guy. In fact, let’s freeze-frame on his face as he rolls his eyes at me for calling Piazza Navona a shopping center.

I smile, not realizing yet that I have no idea what the Vatican looks like, “Great thanks. And which bus do I take?”

“It’s called SIT bus. Just go through those doors and walk straight. Do you need me to write it down for you?” He rolls his eyes again and says under his breath, “Psh, a shopping center.”

The bus wasn’t too hard to find and the ticket wasn’t too expensive and I figured it would probably have free wifi so I could give Deborah my ETA.

The bus did have free wifi. But only in every third row. I was not in a third row.

Trying to get a signal when you’re out of range is like swimming out to a buoy in open water. You put your head down and you swimmmmm until you’re exhausted, but when you look up, the buoy is still like a light year away. And the more you swim, the farther away it looks and you start panicking. And in your panic you start thinking of all the things that could possibly go wrong like, “What if I can’t get back to the shore?” or “What if there’s a shark in the water?” or “Why did I eat so many chips at lunch? And if I barf in the ocean, will it sink to the bottom or just dissipate like food coloring?”

Okay, so maybe that isn’t exactly what trying to get a signal is like, but I definitely did go over some of the “worst case scenarios” in my head during that hour+ bus ride.

But Deborah and I loosely agreed to meet at the fountain around six so if I could find my way from the bus stop I’d only be fifteen minutes late… Right?

Let me just put this out there: L.A. is not the only city with an obnoxious amount of traffic.

Also, I should add: I missed the Vatican stop.

There is a “river” that runs through Rome (it looks like the sewer duct that spills into the San Diego Bay except greener) and over this “river” are several bridges, the names of which I never took the time to learn. We crossed over one of the bridges after following the flow of traffic along the “river” for a substantial period of time. Then we made our way towards the center of the city, twisting and turning precariously.

After about twenty minutes I looked up from my “connection error” message to see that we were back at the river. Every Czech cuss word my students had taught me in the last year flew across my mind and I groaned audibly when we crossed a bridge two down from the one we went over a half hour ago.

And then we stopped at a train station and everyone got off.

Me and the Asian kid sitting in front of me were both like, “Well, crap.”

“Do you know where we are?” I asked him.

“I’m here to see my sister.” I stuck out my hand and we shook on our mutual geographical disability.

We got directions from the bus driver who openly laughed at us but then winked at me and we made our way towards the train station nearby. We both purchased maps and the lady even helped me figure out where I was trying to go, which bus I needed to get there and how to purchase a ticket.

Malaysia guy and I parted ways and I found myself on a bus again.

Here’s the problem with buses in Italy: they do not tell you which stop you’re at. This is important because if you’re new to the city, there is literally no way to figure out when to get off.

I quickly realized this and pulled out my laminated, newly-acquired tourist map and followed the streets we drove past with one finger on the glossy guide. I can imagine how ridiculous I must have looked, stuffed backpack in my lap, hidden behind a map that may as well have been a huge, flashing sign that said, “Hello! I’m a lost tourist and I have no idea what I’m doing!”

For a moment, I looked up from my map-tracing (intense business, let me tell you) and noticed a very old man standing next to me. In Prague, you give your seat up for the elderly, or at least offer it. I felt really uncomfortable sitting when he was standing so I made a move to give him my seat. He noticed my shuffling right away and put one hand on my rising shoulder, gently setting me back into the musty bus chair.

At the time I just felt really grateful. Now I’m realizing how pathetic I must have looked for him to have done that. Eventually he ended up in a seat across from me and he hummed to himself for about three stops. When I got off, he gave me a toothy smile – just enough encouragement for me to figure out where to go next.

Even with the map, I got lost again. 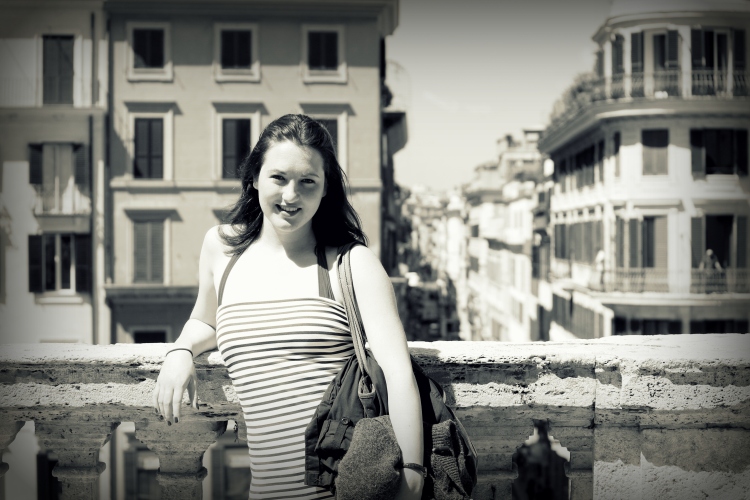 I walked through the narrow sidewalks of Rome, ignoring the cheerful sounds and tantalizing smells – all distractions I could not afford.

Worst case scenarios ran through my head, though, knowing now that there is almost no way a taxi would have taken me all the way up to their apartment, they were all pretty tame compared to the bleak reality. If I couldn’t find Piazza Navona – if Deborah wasn’t there – I was going to be in big trouble.

It was already two hours past our meeting time and I didn’t know if Deborah would be at the Piazza or at the apartment so I decided to stop at a café, get an espresso (something you can drink quickly) and use their internet to facebook Deborah and make a plan (I had already tried texting her and my brother-in-law, without success).

The maître d sat me down cheerily at a table. He was all smiles and flirtation, neither of which I appreciated at the moment. Then the older waiter came by for my order – he was more wholesome charm than just raw smiles and that I always appreciate.

“You can put your bag here,” he said to me when he saw my backpack on my lap. Setting it in the narrow space between my table and the empty one next to me, he reassured, “No one will come by here. You are okay. Just relax.”

How panicked do I look right now? I thought to myself.

I ordered an espresso and asked for their internet passkey. I was minutes away from everything being okay, I just knew it.

And then, because OF COURSE, for whatever reason, my phone refused to acknowledge the signal. I tried again and again but it was like swimming out to that buoy. Next thing I knew, I was struggling against the urge to cry and wondering how embarrassing it would be to order, drink and pay in the space of two minutes?

Hailing the maître d and waving a 5 Euro bill, I asked if I could pay for my drink.

He gave me a huge smile, his twinkly eyes nearly covered by an absurd mass of curly black hair.

I thanked him quickly, clumsily grabbed by bag and rushed out from the tiny tables in the teeny sidewalk café like an elephant racing through a set of dominoes.

I found the square and, after circling the fountain, I found Deborah and Omar. And I realized how much I loved Rome already, if only because of the lady who gave me directions, the man on the bus who hummed to himself, and the waiter who took pity on a distressed tourist.

After that – and seeing Deborah and Omar – I knew the rest of the weekend was going to be just fine, even if we never left the apartment. People will always be better than places – people make places worthwhile.

“Are you going to write about Rome?” Deborah asked me as we walked back to the apartment and the twilighting streets of Rome unfurled before us in their full gayety and color.

“Yes,” I said. “I’ll probably write about getting lost today.”

“Oh Mary,” she said. “You always write about getting lost.”

I know. It’s the best part of the adventure.