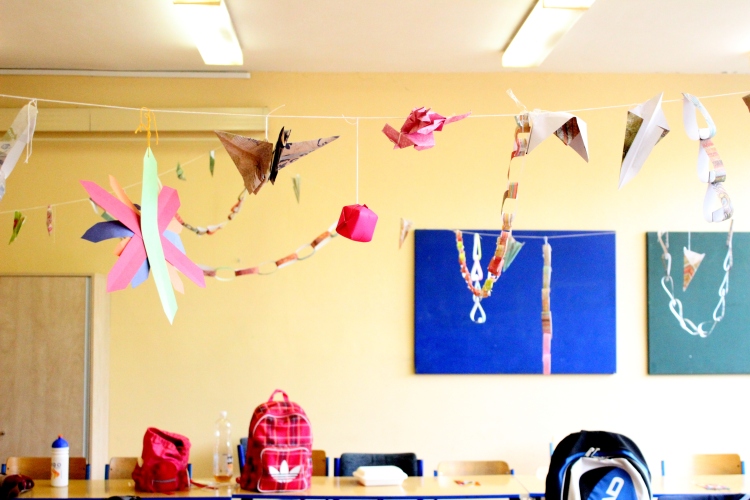 The green gate, bedazzled with large drops of dew, creaked open and I shuffled into the back entrance of the school lot wrapped loosely in my obnoxiously yellow windbreaker, eating a cold pizza bun from the bakery by the bus stop.

“Ahoj holky!” I called to the teachers standing by the back door – “Hey girls!” Three of them were standing in the misty morning air for their smoke break. It was the week before school started so they don’t have to hide from the children behind the building.

They burst into welcoming ‘hello’s and bright smiles.

“Máš trochu snídani, Mary?” called one of the ladies – “Do you have a little breakfast?”

I giggled bashfully – eating and walking, a very unCzech habit, is something I haven’t been able to quit yet.

Nodding and grinning, I joined their circle and we caught up on each other’s summers briefly before heading inside together.

There. That’s it. That’s how my school year began.

All the stress of late August – all the worries about how hard this year would be, all the anxiety of going through what I went through last year – all washed away entirely, completely and without residue.

It literally took less than a minute to realize this was going to be a new year, a good year; but as the last few weeks have unfolded, I’m understanding more and more how wonderful this year could actually be.

Being able to speak a little Czech now has been helpful. Someone heard me telling a story in Czech and news spread pretty quickly so that now even some of the English teachers talk to me mostly in Czech. Ladies who would uncomfortably shuffle past me last year will sit down with me at lunch now. You never realize how high the language barrier is until it’s gone and you can see the view on the other side.

Not saying their faith in my language abilities is totally justified. I certainly don’t understand everything, but I’m really good at faking my way through conversations.

The vice principal, sort of the ship’s captain here, has warmed up to me significantly. Last year was rough for us. She doesn’t speak any English at all.

Today she called me into her office as I was leaving school. The secretary and the woman I’ve spent the last year assuming was the accountant were both present. Neither speaks any English either. So the vice principal gave me my new insurance card and said something about my officemate explaining more to me later and she did so entirely in Czech. I casually thanked her (also in Czech) and then said goodbye to the ladies. In the hallway I could hear her laughing to the other women and in Czech she said, “I don’t know how much she understands, but she certainly speaks!”

I think what I was most worried about was teaching, though. I teach 4th, 6th and 9th graders which means that this year I won’t have any of the same students as last year. I am a little bit sad about that because my students last year were… precious. Precious little Frankensteins who hazed me with more diligence and enchanting disruption than any teacher in the history of ever has probably had to endure. I cannot believe I’m saying this but… I miss my fourth graders immensely.

My first surprise was discovering how nice it was to see all my kids after two months away from them. We had little reunions that whole first week.

Some of my fourth graders from last year are now on my floor – their classroom is just across the hall from my office. I stepped into the doorway of their classroom to say ‘hello’ and was immediately swarmed. Marek showed off his baseball shirt; Klaudie has a new haircut; Petra went to Greece for the summer; Max had nothing to say but stood there anyway with a big, quiet grin.

In the lunch line I see a new batch of my old students every day. We high-five and talk about how school is starting. They laugh when I call them all okurky (cucumbers) because some things never stop being weird.

And so far, without fail, every time I have gone to the second floor, the now-7th grade girls will run across the hallway towards me, screaming, “Mary! Okurka-Mary!” Then they insist on a group hug and ask me if we are best friends (which, of course, we are). Today they showed me “Frozen” on someone’s phone and were so jazzed when I was able to sing along to “Let it Go” in Czech.

So some things haven’t changed, but hugs in the hallway don’t replace class time.

I know this may seem crazy but I really, really miss looking for my 10 year olds in the first five minutes of class as they hide under chairs and in cabinets. I miss letting my sixth graders take selfies with me as a condition that they’ll put their phones away for the rest of class.

I was actually a little disappointed after a week of perfect classes (and folks, can I just say that it brings tears of joy to my eyes to say that I have not had one bad class yet and we’re already two weeks in! Everyone turns in homework! Everyone listens in class! No fist-fights yet! . . I don’t even know how I survived last year…).

But perfect is, well, boring. Where have all my trouble-makers gotten to? . . . I’m going to have absolutely nothing to blog about this year!

It was during one of these perfect classes that I had my first glimmer of hope. We were reviewing ‘things in the classroom’ and my 10 year olds were dutifully writing down words as I wrote them on the chalkboard.

“Sponge,” I said, holding up the object they use to clean the blackboard with. “This is a sponge.”

“Sponge Bob!” shouted one of the girls – I haven’t learned her name yet, so we’ll call her Terka. I nodded, bemused, among the chorus of well-behaved chuckles. The ‘Sponge Bob’ joke is pretty typical. For the last year, somebody has cracked it every class.

“Chalk,” I said, showing them the piece of yellow chalk and then writing the word on the board. There was silence as pens scribbled. Terka squirmed and I could tell she was sitting on the edge of something good.

Then her eyes lit up and she shouted, “CHALK NORRIS!”

I was so surprised I actually had no words. I just stood there stupidly holding the sponge in one hand, looking out at twelve little fourth graders who had all begun chirping “Chalk Norris! Spooooonge Bob!”

And I knew. I knew it was going to be a good year.