Time: approximately 9 p.m. on Sunday the 14th of September. 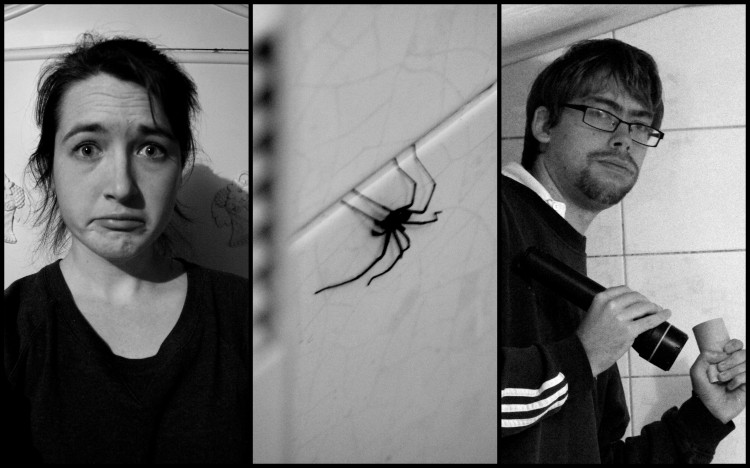 I traced the hallway to its end, fully aware that this time of year – in this region of the house – is known for an influx in hostile forces. Time and training – and brutal personal experience – has taught me to look under the bathroom door frame before stepping through it, check the shower drain before climbing in, and shake the towel before using it. There is no telling when or where a spider may stage its attack. Constant vigilance is required to survive here.

This understood, the bathroom tends to be more of a danger zone than the water closet (a water closet is where Europeans keep the toilet because having a John and a sink in the same room makes no sense, whatsoever). It was in the direction of the W.C. that I was headed, so although I was wary, I was not prepared – mentally or emotionally – for what was about to cross my path.

I crossed the hearth of the small room. It feels like a bomb shelter with its low ceiling and narrow walls – except, of course, for the toilet at the end and the lace curtain in the window.

Sleep was already getting the better of me and the house was quiet.

And then. Then it happened.

The largest spider I have seen in my entire life jumped, no flew, across the wall. It had sixteen legs, probably more (*In an effort to be honest, I would like to correct the last sentence. The spider was definitely just chilling below the window when I saw it. No movement occurred at that time). I was already fully inside the bomb-shelter bathroom and my proximity to the arachnid was nothing short of heart-stopping.

I screamed. And ran.

“Jared!” I yelled, tripping up the three stairs to reach the parallel hallway outside our bedrooms. “Jared, there’s a huge spider in the bathroom!”

Jared slowly and casually opened his door and I stood there shaking with laughter and choking back sobs – because, let’s be honest, when you realize there’s a spider large enough to use your razor for its leg hair, the natural human response is to stop functioning and give up on life.

“Don’t kill it, Jared,” I shouted from my bedroom where I was pacing and wringing my hands like a Charlotte Bronte character.

The sound of Jared stumbling quickly from the bathroom echoed through the wall and I knew it was time to face the beast again.

“Why didn’t you warn me, Mary?” said Jared, quivery and pale. “That thing is huge!”

“I DID warn you!” I said, re-entering the hallway timidly. “No one ever believes me!”

We both peered into the water closet at the spider. It was perched smugly behind the electric heater.

We didn’t move. Neither did it.

“We should use the downstairs bathroom,” Jared answered.

Just then, the spider made a move towards the heater. We both jumped (because we are equal parts giddy, spooked and skittish).

Jared turned on his heel and ran for the stairwell calling, “Dad, Daaaaad!”

I did a nervous dance in the hallway before realizing I wasn’t going to be able to stand next to the doorway by myself for longer than 45 seconds. I waited on the top stair.

Jerry ambled up with a bemused smile.

“Spiders are a sign of life, Mary,” he reminded me as I let him lead the way towards the water closet.

“Well, there’s a little too much life in there right now,” I told him. “I mean, this thing could eat all of us in our sleep.”

I felt sick. Spiders are detestable but I just can’t bring myself to watch them be killed. So I hid in my room.

From my fetal position, I let out an acknowledging groan.

I opened the door and Jerry gave me a concentrated look.

“I need a pencil or something to knock him out from behind the heater. Can I borrow one of yours?”

“I don’t really have any,” I said looking around my desk.

“You have a whole jar,” said Jerry pointing to the empty Poptart box where I keep my pens.

“Yes…” I hesitated. “But if you use one of those on the spider you may as well just throw it away because I won’t touch it again.”

Jerry visibly struggled to keep the consternation from his face. He disappeared into Jared’s room and came out with a writing utensil. I waited in the hallway while he and Jared “took care of things.” The commentary through the wall was not comforting. The noise level rose to a point I could not ignore and I peeped around the corner to see Jerry chasing the spider around the floor, stamping it with his foot. Jared was hooting and the ghosts of a thousand deceased arachnids were squealing in anger. I burst into tears.

The spider was gotten. His guts painted a good square inch of my bathroom floor a purplish-red. I cleaned that up myself on the condition that Jerry got all the legs up first.

It took me a week to wind down. Some things you just can’t unsee.

Nine days later, I had just finished logging my thoughts on this last week’s encounter when I went to use the very same water closet.

I actually make a habit of counting all the spiders in the corners (alive and dead). Usually, they’re the wispy daddy-long-legs. Uncomfortable to be around, but by no means anything to fuss about. My count was at 8 when I decided to check beneath the toilet. Between the upper corner and the floor I caught sight of ANOTHER SPIDER, JUST AS BIG AS THE ONE I HAD JUST FINISHED WRITING ABOUT. He was hard to miss given that he was SIX INCHES FROM MY FACE. 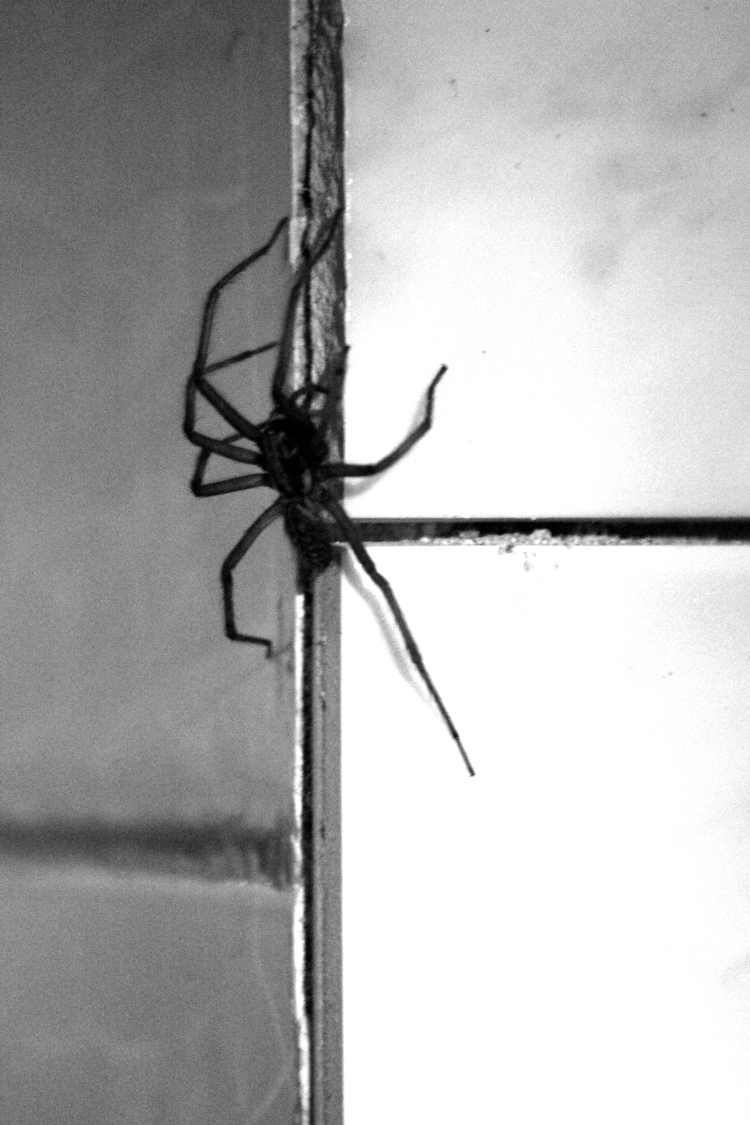 This is real photo documentation of the spider in my bathroom. DO YOU BELIEVE ME NOW, CYBERSPACE??

(It’s hard for me to write this without crying and laughing simultaneously and I keep feeling something tickling the back of my neck. Thus begins the meltdown…).

I ran from the bathroom, convulsing in pre-nervous breakdown manner as I washed my hands (Okay, maybe it’s a good thing that the sink and the toilet aren’t in the same room).

For the record, I have actually washed my hands as a method of nervous therapy since third grade and it started with those gross pictures of bugs shedding their exoskeletons in science class. Serious. Just ask my mom.

So, I made it downstairs (barely) where Jared and his mom were eating a late dinner. I couldn’t even walk through the door I was hyperventilating so hard. When I finally stepped into the kitchen it was at a decline, ending with me lying completely on the floor sobbing and laughing and batting my hair like a crazy person (because I didn’t already look like a crazy person lying on the floor).

“Are you mopping the floor, Mary?” said Marilyn sweetly (she puts up with my weirdness with a graciousness I don’t deserve).

Jared immediately understood. He grabbed a spatchula and headed for the door (Marilyn stopped him and made him take a weapon that we don’t use for cooking). I stayed on the floor and convulsed for a little while before standing and pacing in a circle.

“What if there’s one on me?” I stuttered to Marilyn, still swatting my hair and the back of my sweatshirt. “What if it had babies in my hair?”

From the third floor, we heard a cry. Twice in a week, Jared had underestimated my description of the monsters that infest the upper bathroom.

I ran to the top floor, mostly because being in the kitchen just made me shiver more awkwardly. I’m a woman of action.

I didn’t bother to correct him this time.

“I don’t think I can kill him with this…” Jared said, looking at the short toilet paper roll he was holding.

“How do you think he got in here, Jared?” I whimpered.

“He’s probably the mate of the last one we killed.”

I literally almost threw up.

Back to my room. I just cannot, cannot watch spiders be killed. Through the wall I could hear Jared yelp and then shout, “He fell!”

“Is he alive?” I shouted back.

“No. But you should come see this!”

Begrudgingly, I shuffled cautiously into the hallway. Jared stood in the water closet over the carcass of our house guest.

“He didn’t move at all when I hit him,” said Jared. “And except for this leg that’s still clinging to the wall up here, he’s in pretty good shape.”

“I think so.” Jared seemed troubled. “I can’t believe he didn’t move. It’s like he didn’t put up a fight at all.”

“Maybe he wanted to die,” I said quietly from my safe spot at the end of the hall. From here the spider was barely a spec on the bathroom floor. “Maybe he was so sad we killed his mate that he was just waiting for us to come get him too.”

Jared cleaned up the crusty, dead spider and his detached limbs and I went to go sit in my room. My room is a growing collection of webs (though I rarely see the spiders in them) because I don’t have the heart or the nerve to take them down.

Why are spiders a sign of life? Is it because they remind us that we’re not alone – that, even unseen, there are created things with the breath of life who share our space and our homes? Are they a metaphor for the beauty that is struggle and hard work and, ultimately, a pretty short lifespan?  Or do they just mean that God has not forgotten us? Like with the lilies of the valley and the sparrows that fall, God orchestrates the needs and cares of even the littlest creatures (and the biggest, scariest little creatures).

And if God cares for the spiders, how much more will he protect His children?

One thought on “Spiders, sparrows and a minor meltdown”