“Are you ready for this?” she asks as we step onto the metro escalator and climb out into the grey sunlight of one of Prague’s most distinguished avenues – Národní Třída.

I nod but in truth, I have no idea what to expect.

On the 17th of November, the Czech Republic celebrated 25 years of freedom from communism, a birthday not wholly unlike American Independence Day. But my only taste of remembering sacrifice and honoring hard-won liberties is from 4th of July picnics with streamers and fireworks every year.

The street we fall into does not look like the kind of celebration I am used to. It is a mass of people moving slowly along the avenue with subdued, if not somber countenances. Trams have been stopped and traffic rerouted, so from sidewalk to sidewalk it is one continuous flow of human beings.

“Do you have parades in the USA?” my Czech friend asks me. Eliška guides us through the flow of people as she questions me about our differing cultures.

This is hardly a parade. It seems more like a march to me. A march through various street vendors and concert stages, all mid-performance but with little crowd reaction. It’s like walking through the halls of a museum where all the exhibits are alive but the stoicism and concentration of the patrons remains the same.

We leave the sidewalk and find ourselves in the middle of the current. Below us, red, white and blue confetti has fallen into the grooves of the tram tracks. In fact, the whole avenue is covered in heaps of colored-paper bits that blow down the street in swirls whenever the wind picks up. 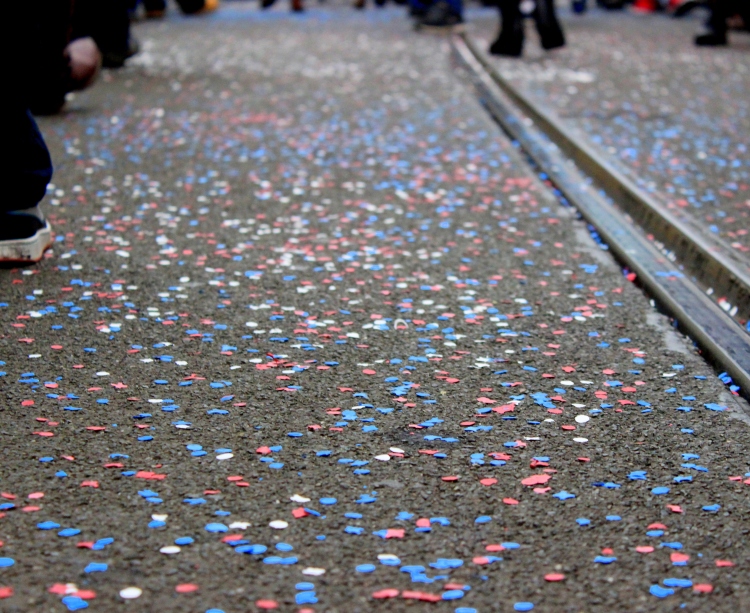 Eliška explains that it was called the Velvet Revolution because so few people were hurt.

“Everyone knew it was coming, everyone wanted it, even the police,” she says. “Only a few students were beaten and we light candles for them in remembrance.”

Somewhere down the street we run into a makeshift structure that looks like a jungle gym you might find on a playground. There are already several small children sitting or pulling themselves on top of this one. They hold signs which say, “Miloše do koše.” It looks like a cute rhyme but it means “Miloš to the garbage.” 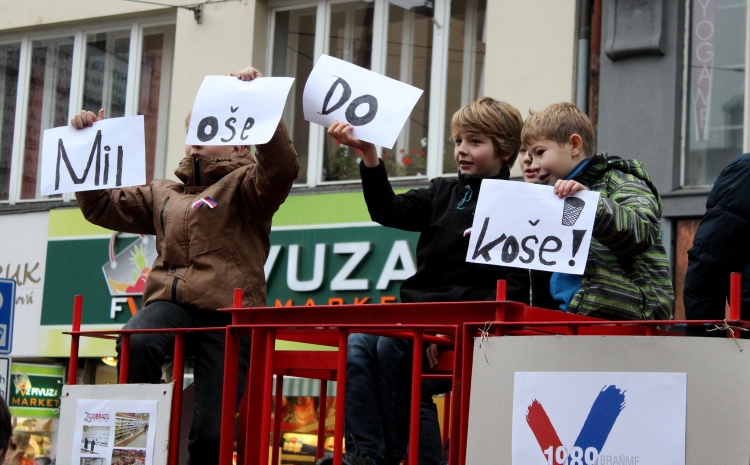 Czech President Miloš Zeman is not a popular man here. He has a reputation for drinking excessively at inappropriate times and is generally considered to be a bimbo. Most recently, he let loose a string of vulgarities in an interview that made international headlines and inspired a musical remix video replayed over and over on children’s mobiles in the hallways of the nation’s schools.

“My friend just texted me,” says Eliska. “She’s at the protest in front of the castle. Want to go?”

“Sure,” I say, still watching the children gleefully hold up their little signs.

The avenue spills out into a street that runs along the river and the parade halts. We climb back onto the sidewalk and pass a number of masked parties and oddly constructed floats.

I cannot help but think that most of these groups are probably involved in some sort of demonstration with references to Czech folklore that I do not understand. The ghouls and disfigured faces occasionally take off their masks to smoke or chug from a beer bottle.

Further down, more marchers have pooled together with signs that say things like, “Zeman is a pig.” 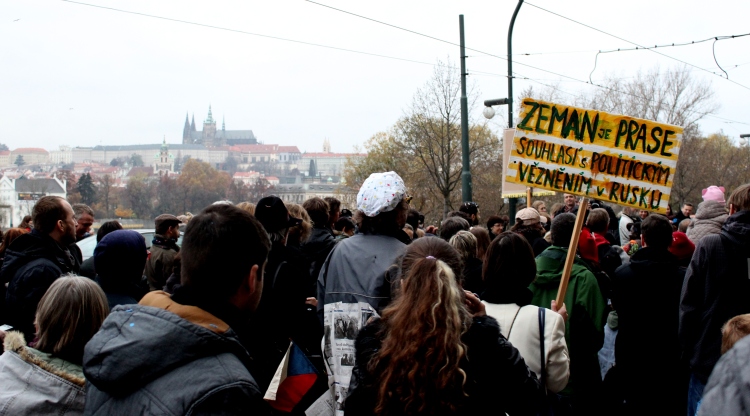 It is the first day that looks like winter. The trees have finally lost all their leaves and the sky is hazy. But the waters of the Vltava below us run silver and the red and teal rooftops of Prague seem frigidly awake.

We cross the Charles’ Bridge and head up the hill to the castle compound. Eliška knows a back way so we avoid the waves of people who are crawling up the cobblestone path towards the thousand-year old castle and the protesters in front of it.

When we finally breach the crest of the hill, a sprawling lawn of grey bricks lays in front of us. To our right is the castle, gated with iron bars and menacing statues of gargantuan men brandishing pre-medieval weaponry. To our left is the city, falling quickly and then stretching out over the smaller hills lining the ghostly, great river. And directly in front of us, crowding the square, are thousands of people holding signs and chanting.

Most of them are holding red signs the size of a large postcard.

“They’re red cards, like in football,” says Eliška, and I have to remind myself that she is referring to European football, soccer. “They want to throw Zeman out.”

Some have signs that Eliška refuses to translate because of the vulgarity. The crowd is determined to throw Zeman’s careless speech right back at him and the result is not flattering.

Later in the evening, a moment we would miss, a different crowd of protesters would be throwing eggs at the president. But for now, the hostilities are only verbal.

Several of the protesters flash signs that say, “Free Tibet.”

“That’s typical,” Eliška says. “Do you have a problem? Can you make a sign for it? Great! Come join our protest!”

I laugh, but only because I have learned to appreciate that Czech humor revolves almost entirely around sarcasm. The crowd starts chanting something and Eliška shakes her head.

“Well, that’s nice,” she says. “They are calling him a Russian cockroach.” 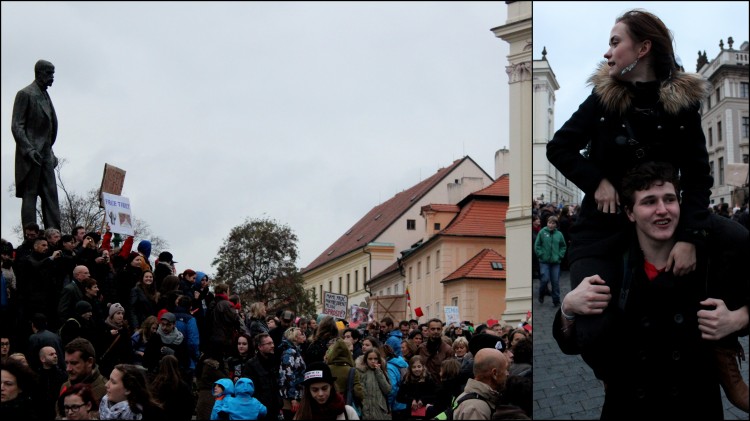 Eliška spots some of her schoolmates and we walk over to them.

The huddle of youngsters seem disconnected from the rest of the protest. A pretty girl with a fur-lined hood sits on the shoulders of her friend, phone to her ear, eyes searching the crowd. The boy beneath her laughs under the strain of their balancing act. Eliška introduces them all to me, but when the girl finally reaches the ground, she turns away from us and shouts, “Pindo!”

“I have never heard that name before,” I whisper to Eliška.

“It isn’t a proper name,” she tells me. “It’s a nickname. But unfortunately I can’t translate it because it only has inappropriate equivalents in English.”

I am realizing that this is fairly standard for language crossovers. Some things in culture cannot be paralleled.

The boy in question wanders over to us. He has dark hair that falls into his eyes and thick glasses. He looks every part the student.

Young and antsy, the group begins to pull away from the crowd and move downhill. 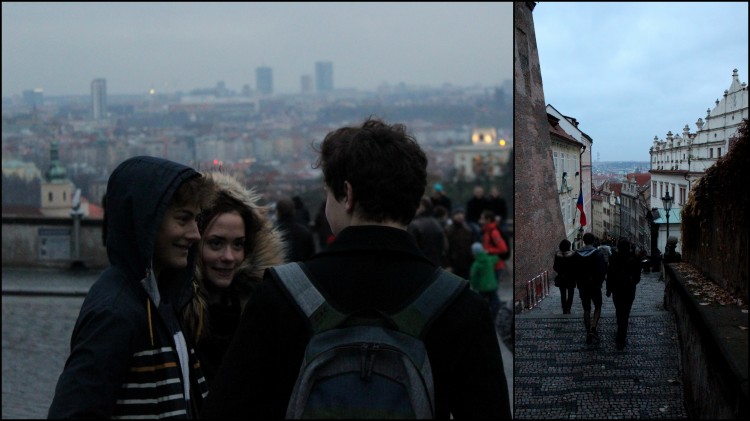 We are joined by Pinda’s friend, a lanky boy with a snarky lip.

Our flunk of students crosses back over the Charle’s Bridge in scattered pairs, regrouping beneath the ominous archway at the end. We split ways with the fur-jacket girl and her posse, taking Pinda and his friend with us.

The sky is darkening quickly even though it is only 4:30 and it is bringing with it a steep drop in temperature. We hug ourselves through thin coats and threadbare scarves, wandering to stay warm.

Národní Třída is still packed with people, but now candles line the curbs and create pockets in the middle of the street. Small children squat around the shrines, entranced and wholly unappreciative of what they represent.

We meander on until the lanky boy pulls us down a narrow alley, past the police blockade and the street musicians. It is even darker in the alleyway and when we finally stop, we are standing in front of a primary school where an older boy and girl sit coolly on the front step.

“That’s his brother,” Eliška explains to me. “And his girlfriend. And this is the school we used to go to.”

I listen in on their conversation but it’s tough to understand. Eliška helps.

“She says she hates the Czech Republic,” I’m told. “He’s asking her why.”

Eliška goes quiet for a moment and then says, “Sorry, I didn’t catch what her answer was.”

I shrug. This girl isn’t the first I’ve met who is completely disenchanted with her homeland. I’ve seen a lot of young people here searching for identity in their nationality. Americans seem to be bred with patriotism. But the Czech Republic is a young country and they are still fighting for what they believe they deserve – like a President who will respect them enough to respect his position in office. They are still in the adolescence of liberty.

Back on the street, we weave through crowds till we find Eliška’s classmates, two girls nibbling on slices of ham on bread rolls and chewing their fingernails to stay warm.

The boys say their farewells and our new companions produce a packet of svíčky – candles.

Eliška has a lighter so we find a curb and ready our tributes.

“Do you want to light one?” Eliška asks me.

Honored to be included in their act of memorial, I take a candle.

We walk a ways to find a spot where it looks like the wind won’t blow out the tiny wicks. The girls set theirs down first. Their eyes glow softly and I wish I know what they are thinking.

“Here,” says Eliška, handing me the lighter. “Time to be a proper Pražačka.” 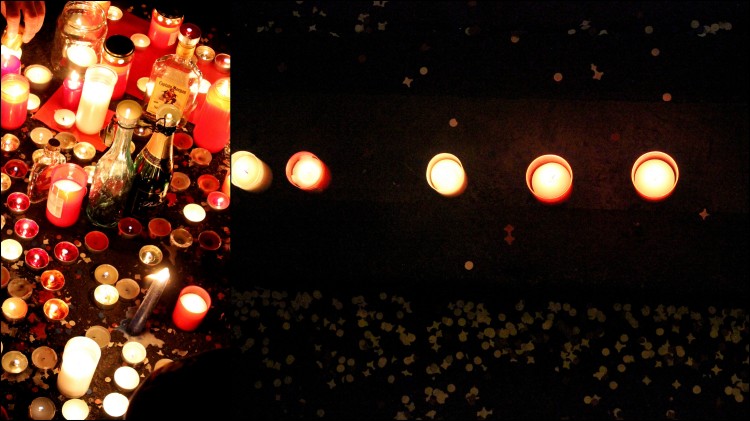 Pražačka. A girl from Prague.

A girl like them, raised in the early swell of a long-fought for freedom, still new enough that it is sweet on their lips and strange to taste. A first generation born into something they didn’t earn themselves and yet still surrounded by the living ghosts of those who bore the yolk of a harsher world. A generation trying to find its own way.

But that is me. That is my generation. That is every generation that didn’t have to sacrifice for what it was given freely.

So I light a candle and I think of my liberty-loving forefathers. I stand with my newfound sisters and we watch our candles and celebrate something that crosses cultural barriers. The candles are small, but together with the hundreds of other flickering flames along the avenue, they light up the whole street.

One thought on “Freedom in a different place”