The bus driver gave us an early-morning glower as he held the doors open long enough for us to jump through, bags still flying behind us.

“You owe me several,” Sarah said, leaning against a balance railing. Julie spotted us from the back of the bus and moved forward.

Sarah glared at me and I sat down, untangling myself from my scarf and hat. Our bodies were hot from running uphill through the icy forest and our lungs burned from heaving in the frozen air.

“It’s been a rough morning,” I said. I keep forgetting Americans in our neck of the woods don’t often run after buses. Sarah wasn’t used to this.

Julie laughed. “I know, I’ve had some of those days too.”

The morning had really only just started. It was barely 6:30 a.m. and still very much dark outside. The bus rumbled through the village, on its way to the city, and our stomachs rumbled with it.

“I don’t do well without breakfast,” Sarah had told me several times earlier as she wolfed down a bowl of yogurt and I scrambled to get everything by the door in time to leave – unsuccessfully, as it turned out.

From the bus, we took a metro all the way to the end of the line – about 40 minutes to wish we were back in our warm, cozy beds. We climbed out of the metro, the light just beginning to wake the sleepy earth, and all three of us gasped.

A light dusting like powdered sugar covered the whole station. Having been deprived of a white Christmas, Sarah and I were pretty ecstatic that it had at least come before the New Year.

“If you think it’s nice here,” Julie told us as we trudged down the stairs to our next bus, “Wait till you see Liberec. It’s much farther north. They’ll have lots of snow.”

Liberec nestles the borders of Germany and Poland and our friends have a farm just outside the town. A family of all boys, save their charming British mother, they are sweet, fun and (do I even need to say?) energetic – although I’ve noticed the energy levels vary depending on the proximity of the latest meal.

Julie was absolutely right. When our bus pulled into the station an hour later, snow carpeted everything not under a roof.

Mrs. K met us with the second oldest boy and their dog, inviting us to bundle into the car so we could hurry home for breakfast and hot tea (“Tea. Yes,” Sarah sighed).

I made a snow angel before popping into the van. No one ever tells you how wet you get making those things.

At their home, Mr. K met us at the door and shoes and coats were shed inside. The other boys meandered down eventually, one of them bringing a striped cat named Sox.

Breakfast consisted of tea, nuts (which we got to crack ourselves), cheesy biscuits and ginger cookies. Enough sustenance to get us through a day of hauling wood.

After clearing the meal, we began the “dress parade,” as Mrs. K calls it. The dress parade is the act of searching for, trying on and claiming old coats, hats, boots, mittens, overalls and jackets to wear on a cold day at the farm. We all looked rather ridiculous by the time we had adequately wrapped ourselves in the mismatched garments, but I’m fairly certain that was the whole point. No one works hard when they’re trying to look good.

One son, one dog, three shivering girls and Mr. and Mrs. K piled into a loaded van and began the trek to the farm.

The day was beautiful, even from the foggy window of a car. White rolling hills spilled out on either side like a great, frothy ocean. Smoke rose from chimneys and spires stuck out from behind frosted rooftops and iced forests. I watched Sarah, hoping she was enjoying herself as much as I was. This was new for both of us, but as Sarah was the one who gave up Christmas with the family to make sure I wasn’t alone for the holidays, I was trying especially hard to show her a good time.

Through several ponied pastures and a large metal gate, we found the farm house. The yard was packed with frozen precipitation and some of us (I won’t name names. It was Julie and Sarah) decided to throw snowballs at others of us (me. They threw snowballs at me) when we weren’t ready for it. 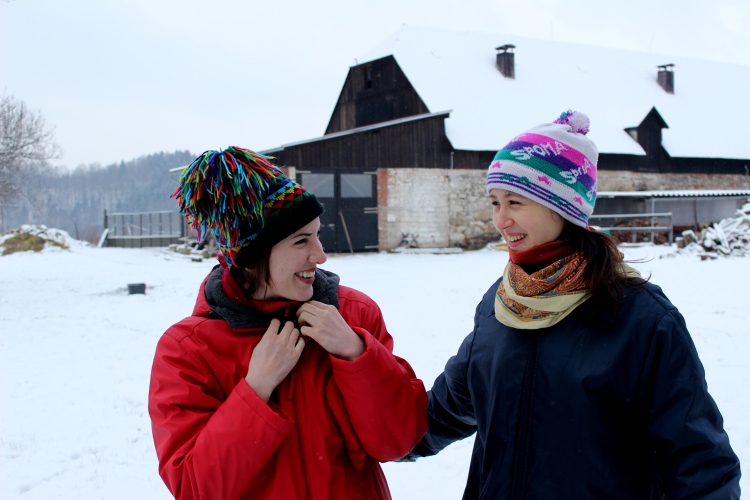 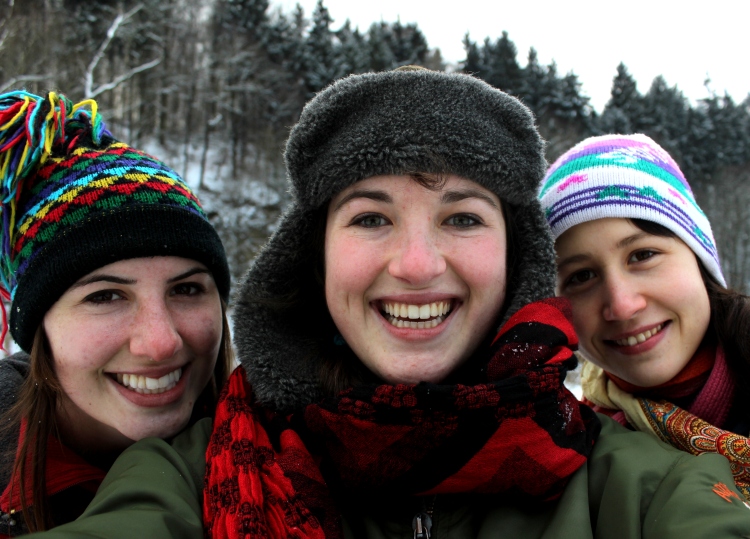 The dog ran about, excited to be out of the car, and the rest of us stacked wood and prepared to go into the woods.

Sarah and I got to ride in the tractor (a birthday present for Mrs. K, because tractors are what all the best women wish for) which jolted through the frozen fields till it berthed next to a patch of trees.

“Get out and look around,” said Mr. K. “There may be deer in these trees and sometimes we see wild boar. You can look for their tracks.”

The dog, who had followed us all the way from the farm yard, nipping at the tractors wheels as he ran, muddled any tracks we may have found. He covered more ground in two minutes than we did the rest of the day.

“I can’t feel my fingers,” I said to Sarah as I fumbled with my camera lens.

“I can’t feel my toes,” she grinned. We licked up slow-falling snowflakes and made footprints in the snow just to hear it crunch beneath us. 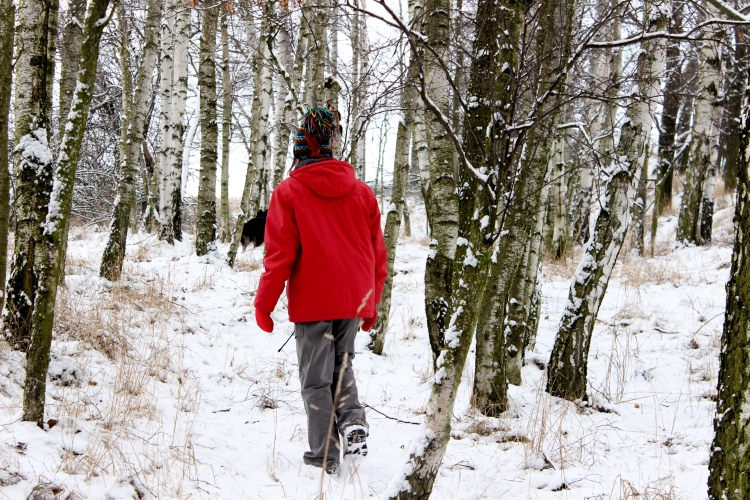 When the rest of the gang showed up with the loaded van, we began pulling dead wood up the hill and stacking it in the tractor. Mr. K cut several trees into logs and we dragged those up the slippery slope as well. Lots of heavy lifting. Lots of sliding backwards. Lots of giggling and groaning and singing wintery songs. Frankly, a lot more tripping on untied shoelaces than I’d like to admit on this blog. Some logs we launched like javelins. The wider, heavier logs we rolled up to a halfway point and let those on the ridge finish dragging them to the tractor.

It took several hours to fill the tractor bed (that’s an estimate – I actually have no idea how long it took because some places are just so beautiful that time stands still). When we were done, we drove back to the farm yard, our warm breath crisping into tiny frozen crystals even inside the van.

Mrs. K had more cheesy biscuits and some hot cider waiting for us.

“Don’t let the dog eat them,” she told us. I wasn’t about to. I’m very protective of my food.

We unloaded the wood – quick work with many hands – and stretched our arms and legs a bit with a stroll to the edge of the fence.

A pine tree garden was hidden behind the barn and the baby trees were peeking out under their snowy coats. Crumbling majestically to our right was a large building with no roof and faded brick walls. Sometimes, I was informed, the boys would shoot the remaining glass from the windows with their BB guns for practice. There was so little left, I imagined it would take a sharp eye. But it was a beautiful building all the same. A relic of another time, a testament to change. 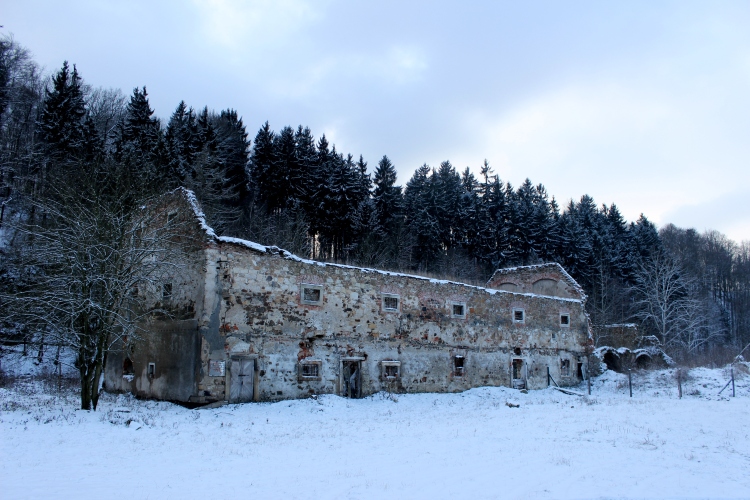 We left the countryside and drove back to town in time for a lunch of soup, homemade bread and a curry dish with sausages and greek yogurt dressing.

More tea and cookies followed, and the conversation warmed up the parts of me that their heater and fresh, dry clothes couldn’t reach.

Eventually, as can be expected at the K home, we turned to the topic of our faith. There aren’t too many Christians in this part of the world and our God is the greatest thing we have in common.

Hard to remember which directions our conversation ambled along, but I do remember talking about the insignificance we sometimes feel, caught up in the rush of life.

“We’re like cosmic spots, when you think of it,” said Mrs. K, her lovely English accent splashing into the air like hot tea into a cup. “And yet there’s a Creator who made us and gave us each a purpose.”

Mmm. A purpose and a path. A Savior.

I think that’s why so many people like the holidays – in the stillness of a world covered in snow, the softness of a night lit by hundreds of candles and the peacefulness of a moment when people you love are finally near again, we can pretend that we don’t need a purpose or a path or a Savior. We can enjoy the moment and hope its effects will last us till the next one comes along.

It began to get dark on our way back to the bus station and it was definitely colder.

Hurried but sincere ‘thank you’s’ were exchanged with hugs and well-wishes. Snow started to fall again and we girls climbed aboard the magic carpet headed for home. Farewell, winter wonderland, farewell.

Sarah and I both agreed that was one of the better days of her stay here. I had to leave for school the morning of her flight home. She walked me to the bus stop (because we finally figured out how to leave enough time to get there without running). I made sure she had a full breakfast before taking off.

We chit-chatted, waiting for the bus to come. A lot about not much. Sister stuff.

When the bus pulled into view, I pulled her into a hug. It was one of those hugs that really feels like a hug. It felt like two little cosmic spots saying ‘goodbye’ and wondering when their paths would cross again.

I watched her disappear from the foggy window of the bus, lost in a blur of white and grey. My favorite Christmas present, possibly ever, and my reminder that God has a purpose for us, even if just in the lives of the people he’s given to us.

*Thanks for everything, Sarah. I owe you so, so many.