People are the same the world over. The farther I travel, the truer I find this to be.

Occasionally, however, in moments where I am confronted by a tradition or a habit of culture or custom that is new to me, foreign in its very essence, or antiquated to a point of appearing alien, I am forced to challenge my notions about people, and, in extension, about myself.

Easter Monday in the Czech Republic provides one such opportunity.

For those unfamiliar with the custom, Easter is celebrated on Monday in the Czech Republic. The four-day weekend usually draws many Czechs into the countryside. The seclusion of far-away villages has provided sanctuary from prying eyes and unwanted visitors since before the days of communism, though Big Brother certainly increased the incentive for Czechs to make a habit of leaving Prague for a few days whenever possible. It is very common for Czechs to have a cottage somewhere away from whatever big city they live in. So as Easter weekend approached, the cars in my neighborhood dwindled down substantially and by Saturday afternoon a stillness had settled over the whole town.

I live in a bit of a village myself. It’s been included into Prague’s city limits, but it looks like a picture clipping from a ‘40’s real estate magazine, complete with a main road winding from the town square, past our war memorial and old-fashioned store fronts, into the forests that crest the hills behind our honey-comb of houses. It’s a quiet place. 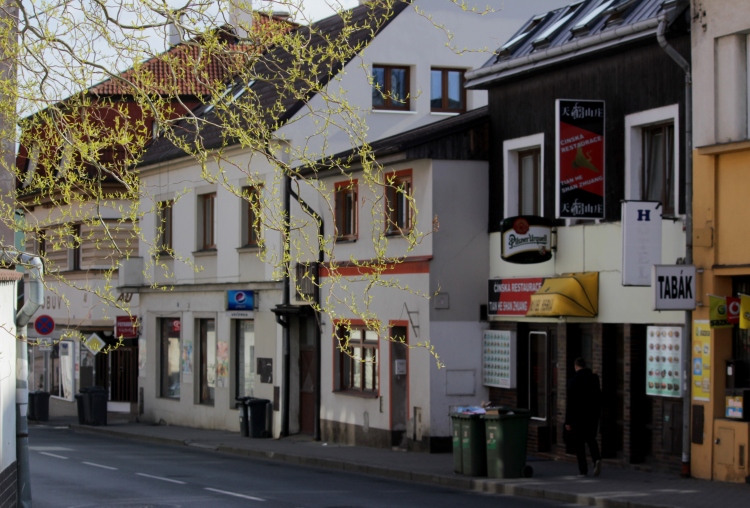 Easter Sunday isn’t really recognized by most Czechs. Many spend the day painting eggs or baking lamb-shaped cakes. It’s Monday that everyone looks forward to.

…If it feels like I’m stalling, it’s because I’m just not sure how to explain this tradition to my American friends.

On Easter Monday, boys are given pomlázky which are whips made of pussywillow twigs and decorated with ribbons. Boys take the whips and . . . for lack of a better way to put this . . . hit girls.

Yes, there is a centuries-old tradition where boys chant a Czech poem and hit girls with whips (for “health and youth” because for what other reason would a woman subject herself to such antics?) and the girls have to give the boys painted eggs or chocolate. In fairness, the boys claim not to really “flog” that hard and the girls are allowed to throw ice water on any boy who tries to swat them after noon.

But no matter how many of my Czech students, colleagues and friends explained it to me, it seemed backwards and third-wordly. So, naturally, I had to see it for myself.

On Monday morning, coated and camera’d, I met my friend at the bus stop at the bottom of our hill. Taylor is like a glass of Southern tea – tall, sweet, and incredibly cool under pressure. She was also interested in this crazy tradition and since she lives in the city, we agreed to walk through my neighborhoods in an attempt to witness this phenomenon.

“I’m really excited about this,” she told me, eyes glistening from the cold. It was only about nine in the morning. She seemed as giddy as I felt.

Before we had even reached the stones stairs leading into the forest, a group of scraggly high school boys appeared from out of nowhere with whips. They saw us and made a move with their pomlázky held out like sabers. Taylor cried out in surprise and as we hurried away I said loudly in Czech, “Sorry, we don’t have chocolate.”

“Co že?!” They sounded frustrated and swatted their whips at the bushes until they reached the next house. As Taylor and I ascended the hill, we heard through the bare-limbed trees the gleeful shrieks of a woman and the chanting of the boys. Laughter.

We looked at each other.

“This is so weird,” said Taylor. We were both turning red. Some of that may have been the chill in the air. It did not feel warm enough to be April.

“I can’t even believe this is a thing,” I said as we climbed the hill. “This would never be allowed in the United States.”

We climbed out of the forest and began down the crumbly streets of the upper neighborhoods.

“Mary, they’re traveling in packs,” said Taylor as we stepped into the middle of the road. Middle school-aged boys were indeed roaming around in groups of fours or sevens. They looked rather silly, strutting so confidently with their bowed whips and wicker Easter baskets, pulling their fuzzy hats and scarves over their ears to keep warm. Everyone in this country needs thug lessons.

We figured out very quickly that if we didn’t make eye contact and kept my very obtrusive camera visible at all times, no one would approach us. These boys were younger than the scalawags by the bus stop anyway.

Still, it did feel a bit like a safari ride. We’d spot a group of boys and stop to get a good picture, daring ourselves to stay still long enough to get a good shot as the mob came closer.

There were a number of fathers walking around with even younger boys, little toddlers who could barely hold their whips up. It was so cute and yet we wrestled with the concept.

Through the slats in a fence, we could see several families gathered in a backyard, making a circle around the whippees, taking turns swatting legs and handing out chocolates.

The US is currently having a “Women’s Rights” revolution with campaigns like #HeForShe, which have garnered attention from Hollywood stars and United Nations representatives alike. In a world where violence against women is being brought to account, it seems impossible that a tradition like this still exists, even if the whipping is playful and the purpose is for good health and chocolate eggs.

We walked through the rows of gated homes, watching spring’s earliest flowers struggle to bloom in the cold weather. The sun did come out eventually and with it came a wave of warmth and some much-needed Vitamin D.

“I want to see someone actually getting whipped,” said Taylor, disappointed by the lack of excitement – most of the action takes place inside the garden gates or doorways, just out of sight, where the mothers wait happily to hand out the hand crafted eggs and bits of candy.

The top of the hill houses a chapel and cemetery. The view of the surrounding valleys is one of my all-time favorites and this morning everything was washed in a cross-stitch of crystal light and velvet shadows.

We talked about the life of an expat, what it’s like living away from our families, how we’re supposed to adjust to going back home.

Home. Wherever that is.

“It’s things like these crazy traditions that make me wish I could stay here,” Taylor admitted.

I nodded. I get that feeling too. As the morning dripped away and the hoards of boys were joined by vivacious girls with baskets and whips, desperate to be included, our doubts about the appropriateness of this particular ritual seemed to melt away with it. Honestly, it was just nice to see so many fathers and sons out together.

We walked to the village square and passed a group of youngsters, led by a girl of about eleven. They eyed us in a business-like manner before the girl said, “Neznáme lidi” – “We don’t know those people.” At least some of these rascals have standards. It’s not typical for girls to go get eggs, especially as they get older, but some of these rambunctious little females were clearly determined to break the mold.

As the square came into view, we heard a group of fathers and a handful of little children emerge from the alley behind us. It looked like a zoo excursion, everyone stuffed in jackets like marshmallows, holding hands in a line, being shuffled along by their dads.

The square was empty and quiet and our stomachs had begun to rumble, so we turned back, following the crooked lanes through lonely blocks of ancient houses before finding the forest path home again.

As we reached it, we heard the cries of a boy whose basket had fallen (or been pushed?) to the ground. Many of his eggs were broken on the street or rolling away to the freedom of the gutters. His pals laughed and kicked the eggs away from him and he sighed as he collected the remainders of his goods and re-basketed them. 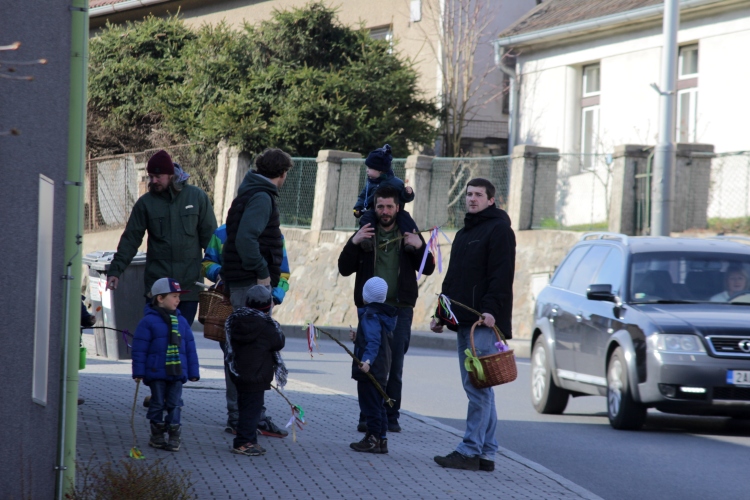 Taylor let out a little sigh.

“Poor guy,” she said as we watched him pick up his half-empty basket and braided whip and trod along after his friends. “He can’t go home without his spoils. That’s no fun at all.”

I looked at her, amused.

“It seems strange to me still, but harmless also. It’s definitely a family activity, isn’t it?”

It definitely is. Mothers and daughters paint the eggs together, boys and fathers go to neighbors and friends to collect them. I can see how it might not be fun to be a girl on this holiday, especially around the age when you just want to sleep in and eat all the chocolate yourself. But seeing the holiday unfolding, like an odd trick-or-treating ritual, somehow made it more human – more understandable. It’s not what it looks like from the outside.

I think that’s what our problem is. We approach the world with our preconceived notions of what is or isn’t okay. We try to interpret the world through lenses tinted with dust from our own experiences and way of thinking. But how much more would we understand our neighbors around the world if took our glasses off. What if, instead of trying to interpret or pass judgments, we simply aimed to experience the world around us. To live in someone else’s home for a day or a month or a year. Unfiltered. Unassuming.

Not to say that this would solve the world’s problems or that we would all eventually agree or even understand each other. But I think it would go a long way in developing empathy for one another in proving that, no matter how far you travel, people will be the same. Boys will chase girls; girls will ambitiously reach out for what is often given freely to boys; mothers will give freely to everyone in love; and fathers will be that pivotal role model, either in example or absence, the guiding hand to someone very young as they stumble along the road in the spring of life.

2 thoughts on “Whipping girls and other normal Easter traditions”