My mom is half Italian, a fact we were reminded of quite often growing up. Tales of Sicily, faded pictures of granddad and his brothers looking like total greasers, out-of-this-world lasagnas on Sunday and, of course, our mother all called attention to our much-loved Italian heritage.

I never thought I’d make it to Italy, much less Rome (never really wanted to, to be honest). But four days with my sister (who is much more Italian than I am on a number of levels) in the world’s most famous city brought me face-to-face with two scary truths: that my Mom was not exaggerating about Italians and that most of my accurate knowledge about Rome comes from the Lizzie McGuire Movie.

To be to-the-point (which I rarely am), I’ll say now that the most interesting thing about Rome was the confirmation of five stereotypes I have always held about the city.

1. Italians – This seems the most fitting place to begin. Yes, Italians are loud and friendly and loud. (And they use their hands FOR EVERYTHING when they talk, exactly the way they do in movies). The street outside our apartment echoed chatter and the chiming sounds of broken laughter until 2 a.m. when I awoke with a start at the sound of complete silence, split only by a cozy couple calling “ciao” to the waiter beneath my window.

Italian men are a stereotype in themselves. Very flirtatious. A lot more so than I was expecting. While waiting for my flight back to Prague I saw a group of Italian pilots meeting at the top of the stairs. They embraced each other affectionately (another stereotype!) and then one of them noticed me. I was just walking by and intentionally didn’t make eye-contact because it was not even 8 a.m. and I had no make-up on and we were in an airport, so excuse me for being anti-social/borderline-rude. Undeterred, I saw him swoop off his pilot hat and give me a low bow. I was half way down the stairs before I realized what had just happened – when I turned to look back (not bothering to hide my “what the heck?” expression that only Americans can really master), he was still staring at me cheerily like a huge, happy sheepdog. To be that brazen with a random girl in the terminal, you have to be either very high on life or very Italian. I think he may have been both. 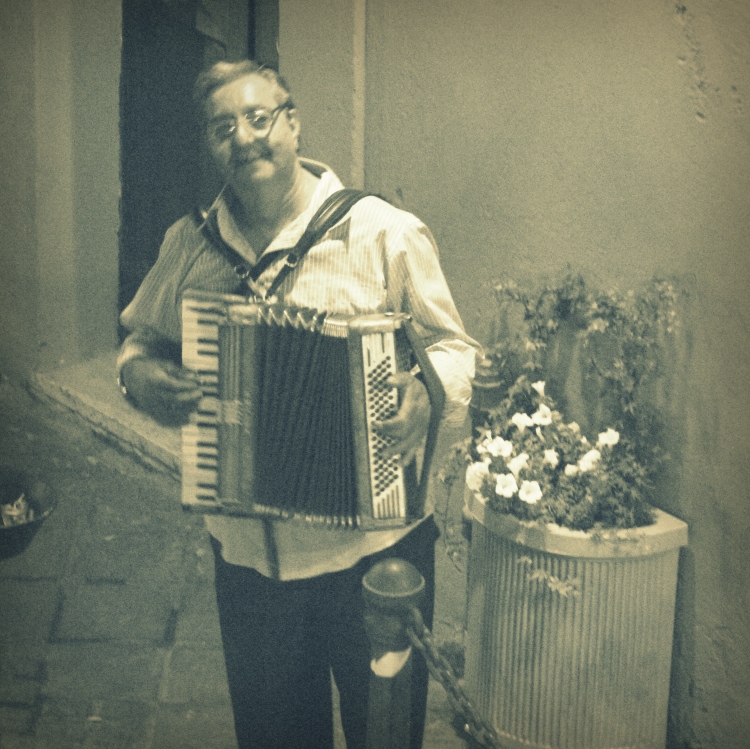 The man playing accordion outside my window.

2. Motorcycles – I thought when Lizzie McGuire got whisked off on a motorcycle it was just a romanticized Hollywoodism, much along the lines of Audrey Hepburn in Roman Holiday. It’s not. Everyone owns a motorcycle. Men and women. Young and old. Competent drivers and less-competent drivers. They all share the road, park in weird places and rev their engines to show off.

3. Tourism – The main reason why I didn’t want to go to Rome was because I figured it was just a tourist trap (with a lot of really old buildings and centuries of history, but you know… tourist trappy stuff also). As it turns out, it is. Between the streets lined with vendors selling knock-off merchandise and the guys dressed as Roman soldiers offering to take pictures with gullible tweenagers, Rome felt a little cheap at points. The tourist shops, the tourist prices, the tourists themselves. And the lines that stretched on for ages. Note to the travel-minded: go to Rome with a pregnant woman – skipping lines is worth the amount of time you’ll spend looking for bathrooms.

4. Gelato – This was the only reason I actually ever wanted to go to Rome. When I was ten I had a “Barbie travels the world” coloring book and in Italy Barbie ate gelato. Let me tell you, it is worth every Euro. (In case you’re reading this, Dad, you should know that my favorite flavors were the ‘lavender and white peach’ and the ‘rosemary and mint’ – thank you for teaching me to try weird things). When our apartment ran out of toilet paper the last night of our stay (having inherited mom’s penny-pinching ways), my sister and I decided it was time for one last gelato run. I made the order – intentionally paying in a large amount of small change to serve as both a distraction and a time-suck – and she inconspicuously grabbed as many napkins from the dispenser as she could stuff in her purse. I’m still not convinced that could be considered stealing, given that they were free napkins and we did pay for the gelato, but we certainly felt pretty sheepish leaving the store. There’s not a lot I won’t do for good ice cream and sufficient quantities of hygienic tissues.

5. Romance – It’s hard to be a proper judge of this when you travel somewhere alone, and much less so when you travel somewhere as the third wheel to a newly-wed couple (though, as my brother-in-law pointed out, he was more of the odd-man-out than I was). However, there is something intensely romantic about Rome. I don’t know if it’s the way the streets hum with the sounds of people and music and clinking glass after the sun goes down and the only light comes from candles, dusty lampshades and fountain bulbs, or if it’s melodic rhythm of the city, from the high notes of a violinist outside a café to the steady rumbling of hundreds feet taking their travelers to new places and new people. Maybe it’s just the flirty pilots at the airport. Whatever it was, it felt like maybe Rome was a good place to get lost in and not find yourself for a while. Maybe you could disappear for days in that rhythmic hum of color, food and hot breezes. Maybe you could also be mugged, murdered or forced into the global slave-trade, but the 14-year old in me thinks enough lasagna might even make a kidnapping worthwhile.

“I’m sure she’ll be fine,” Omar reassured her. The newlyweds watched the crowd shift and change around the elaborate water fountain with the mini-Washington monument and creepy drowning horse sticking up out of the middle.

“Did she check a bag? Maybe it got lost.”

Deborah shook her head. “Wouldn’t she have messaged us if she was stuck at the airport?”

“She could be stuck in traffic on the bus or something.”

“Maybe.” Deborah bit her lip. “Maybe she went to the apartment first and saw we weren’t there and went looking for us…”

“Should I go back and check for her?” Omar offered. Deborah shook her head again.

“I don’t know,” she said. “But this is Mary, so most likely she’s lost and confused somewhere out there.”

And lo, 500 yards away, just around the corner and sitting in a sidewalk café, I was on the verge of tears and desperately trying to get a signal on my phone.